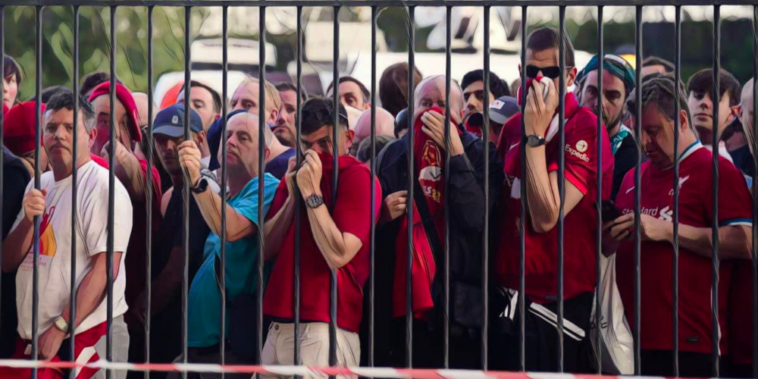 Liverpool are considering legal action over the Champions League final chaos suffered by supporters in Paris.

Crowd control problems saw Saturday’s final at the Stade de France between Liverpool and Real Madrid delayed, as police sought to deal with huge queues which the French sports minister has since blamed on travelling Reds fans gathering en masse without valid tickets.

“What happened, first of all, was this mass gathering of the British supporters of the Liverpool club, without tickets, or with fake tickets,” she told French radio RTL on Monday, as per Sky Sports.

“When there are that many people by the entrance to the stadium, there will be people trying to force their way in through the doors of the Stade de France, and a certain number of youths from the nearby area who were present tried to get in by mixing in with the crowd.”

The response of the French police to the problems has caused huge concerns, with images circulating of Liverpool fans, including children and the disabled, being pepper-sprayed when pressed against fences.

The organisers shut down one entrance in an attempt to deal with the mass queues, of which had been built by a bizarre decision to funnel the Liverpools fans through a narrow passage in an underpass partially-blocked by police vehicles.

The chaos led to some fans scaling the fences in an attempt to escape the closures and police treatment, though there were also large numbers of locals attempting to get into the final without tickets.

This is good accurate reporting. It was shambolic. The unnecessarily poor treatment of people peacefully going to watch a football match was awful & unjustified. I saw no behaviour from Liverpool fans that warranted the police reaction. Just fearful fans wanting to see a game. https://t.co/SnvBbUGxr6

Liverpool FC CEO Billy Hogan has opened up on the club’s response to the Champions League final issues and says legal action is being considered.

“We have followed up on our request for an independent investigation with UEFA in writing,” he told the club’s official website.

“We’ve also noted our deep concern about the false information that’s being circulated, while really urging UEFA to agree to an open and transparent investigation into everything that happened on Saturday night, and we will continue to push for this.

“We are also reviewing legal avenues available to us on behalf of affected supporters.”

Hogan also revealed his surprise at the comments from the French sports minister and called them a deflection tactic for the ‘disgraceful’ scenes witnessed in Paris.

“I would just say we are incredibly surprised that someone in that position would make comments in the first place at this point, when we haven’t had adequate time to understand what happened. There hasn’t been an independent investigation to establish all the facts

“We should know all the facts to make sure that the scenes that we’ve all seen – absolutely disgraceful – from Saturday don’t ever happen again.