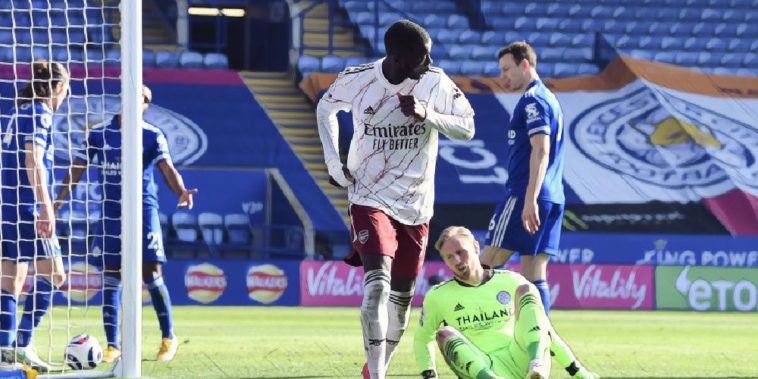 It’s ninth versus tenth this weekend as Leicester host Arsenal at the King Power Stadium, with the visitors seeking to continue their recent unbeaten run.

Here’s everything you need to know about Saturday’s clash:

Having put four past Manchester United and Spartak Moscow in successive games, Leicester continued their recent bright spell with a hard-fought 2-1 win over newly-promoted Brentford, albeit with Brendan Rodgers’ side perhaps a tad fortunate to walk away with all three points.

In truth, the Bees had totally bossed the opening exchanges as they produced a typically strong display on their own turf, yet it was the Foxes who went in ahead at the break, with Youri Tielemans firing in an outrageous 25-yard strike to add his stunner against United last weekend.

A Youri Tielemans special in #LCFC's win at Brentford this weekend 🙌 pic.twitter.com/a2gEg6Y6Xh

Thomas Frank’s men deservedly pulled level through former Huddersfield Town man Mathias Jorgensen on the hour mark, before James Maddison ensured the away side would steal the points after rounding off a blistering counter for his first goal since February.

While it may not have been a vintage display from the visitors, the win ensures that they are now just three points behind West Ham United in fourth and look to have shaken off an unusually slow opening to the season.

Meanwhile, the Foxes also secured their place in the Carabao Cup quarter-finals having seen off Brighton on penalties, with Wales international Danny Ward saving from Enock Mwepu to clinch the victory, after Harvey Barnes and Ademola Lookman had earlier scored in an entertaining 2-2 draw.

That result saw Jamie Vardy rested after he was withdrawn at half-time in the win over Brentford, having picked up a knock in the warm-up, with the Englishman likely to be available again this weekend. Meanwhile, Wilfried Ndidi is not set to return until after the international break, while Marc Albrighton is facing a few weeks on the sidelines after his injury picked up in Moscow.

Arsenal’s dismal first few games of the season seem a distant memory following their recent fine form, with Mikel Arteta’s side currently unbeaten in their last eight games in all competitions and with their sights firmly set on getting back into top-four contention.

Their last league outing saw the Gunners run out 3-1 winners at home to Aston Villa to end their recent poor record against Dean Smith’s side, with goals from Thomas Partey, Pierre-Emerick Aubameyang and Emile Smith Rowe ensuring a routine victory for the hosts.

The latter man, in particular, caught the eye once again for the north London side, teeing up Partey for the opener with a corner, before wrapping up the win after the interval following a counter-attack down the left, after Aubameyang had earlier fired in on the rebound following Emi Martinez’s initial penalty save.

Arteta’s men followed that up with another convincing victory over Leeds United in the Carabao Cup on Tuesday night, ensuring their place in the quarter-final’s after running out 2-0 winners at the Emirates.

The much-changed Gunners side made the breakthrough on 55 minutes as Calum Chambers headed in just 23 seconds after coming off the bench, before Eddie Nketiah capitalised on a Liam Cooper error to extend that lead, the young Englishman lifting the ball over Illan Meslier and slotting home.

That win saw Ben White withdrawn during the second-half after having been suffering from illness, although the centre-back is likely to be involved this weekend.

The two sides played out an eventful encounter when they last met back in February, with Arsenal coming from behind to claim all three points against an injury-affected Leicester side.

The hosts had taken the lead inside just six minutes through Youri Tielemans, before the Gunners struck back late in the first-half through David Luiz, with the defender heading in superbly after compatriot Willian’s whipped free-kick.

Alexandre Lacazette then converted from the penalty spot after Nicolas Pepe’s shot struck the arm of Wilfried Ndidi, the Nigerian having already survived an earlier penalty shout for a foul on Pepe, with the infringement having taken place just outside the box.

2-1 ahead at the break, the Gunners extended that lead just after half-time to wrap up the three points, with the heavily involved Pepe latching onto Willian’s pullback to fire in a simple, close-range finish.

What channel is Leicester v Arsenal on?