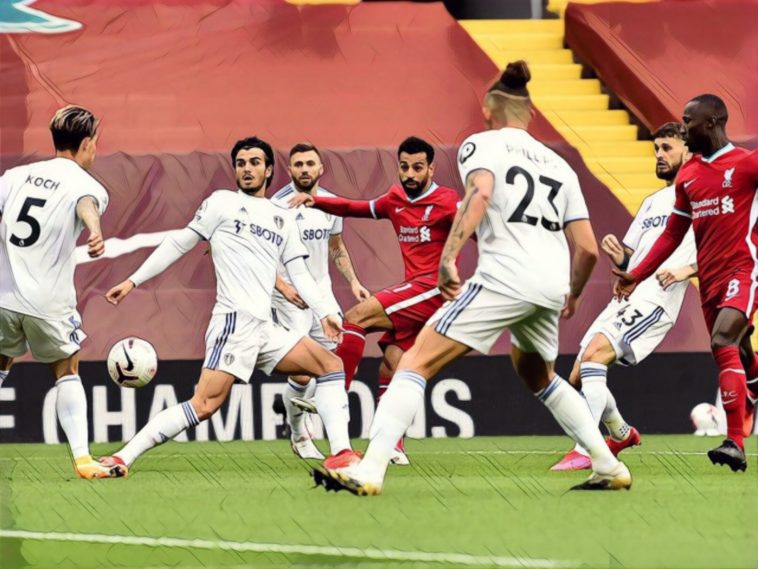 Leeds United host Liverpool on Monday evening, the Reds having claimed a 4-3 victory in a thrilling encounter when the two sides met earlier this season.

Here’s all you need to know about that upcoming meeting at Elland Road:

In what’s been a pretty impressive first season back in the top-flight for Marcelo Bielsa’s side, they produced arguably their biggest result thus far at the weekend, snatching a 2-1 victory against league leaders Manchester City at the Etihad.

The visitors had made their usual lively start and were rewarded just before half-time, the versatile Stuart Dallas slotting home from just outside the box after a lay off from in-form forward Patrick Bamford.

That fine start was then quickly altered as Leeds lost captain Liam Cooper to a red card, the Scotland international given his marching orders following a rash tackle on Gabriel Jesus, leaving his side a man light for the entirety of the second-half.

Down to 10 men, the Yorkshire side were left camped on the edge of their own box, with City finally managing to make the breakthrough in the 76th minute through Ferran Torres, before the brave visitors managed to pull off a remarkable late winner, Dallas once again getting on the scoresheet.

That result is Leeds’ third successive victory in the Premier League and leaves them in tenth, with an outside chance of securing European football come the end of the season.

As for this weekend, Bielsa’s men will be without the suspended Cooper, while star man Raphinha remains a doubt after having limped off in the closing stages on Saturday afternoon.

After having not managed a league win at Anfield since 16 December against Tottenham, the champions finally ended their home hoodoo with a much-needed victory over Aston Villa at the weekend, Trent Alexander-Arnold putting aside his recent criticism to net a fine stoppage-time winner.

Liverpool had fallen behind early on through recent England debutant Ollie Watkins, before Mo Salah drew the sides level midway through the second half, the hosts going on to earn all three points against a spirited Villa side in the final few minutes.

That result could prove pivotal for Jurgen Klopp’s men as they look to try and claim a coveted top-four spot come the end of the season, the side currently in sixth, three points behind West Ham United in fourth.

That need to finish in the Champions League places has been heightened following their exit from this season’s competition in midweek, the Reds suffering a 3-1 aggregate defeat to 13-time winners Real Madrid, with the second-leg seeing a wasteful Liverpool side held to a goalless draw.

Chances from Mo Salah and Roberto Firmino, in particular, could have sparked another famous Anfield comeback for Klopp’s side, yet it wasn’t to be as they simply ran out of ideas against a stubborn Madrid backline.

That painful exit has put greater emphasis on securing a place in the top-four, with the trip to Elland Road another chance to close the gap on the sides above them. As for team news, there should be no new injury concerns for Klopp and co, with Jordan Henderson still a few weeks away from a return.

The Premier League kicked off with a bang on the opening day, as newly-promoted Leeds gave the champions a real fright in a pulsating encounter at Anfield.

The hosts took an early lead through Mo Salah from the penalty spot, before Jack Harrison levelled on 12 minutes with a smart finish after a typically lethal Leeds breakaway. The Reds quickly struck back through Virgil Van Dijk, the Dutchman allowed far too much time and space to head home.

Not to be put off by falling behind again, the visitors again levelled things up through Patrick Bamford, before an exquisite Salah strike gave Klopp’s men the lead going in at half-time.

The Championship winners then produced their third equaliser of the match through an excellent Mateusz Klich effort, although they were cruelly denied a point late on, Salah completing his hat-trick with a second from the spot, after debutant Rodrigo had brought down Fabinho in the box.