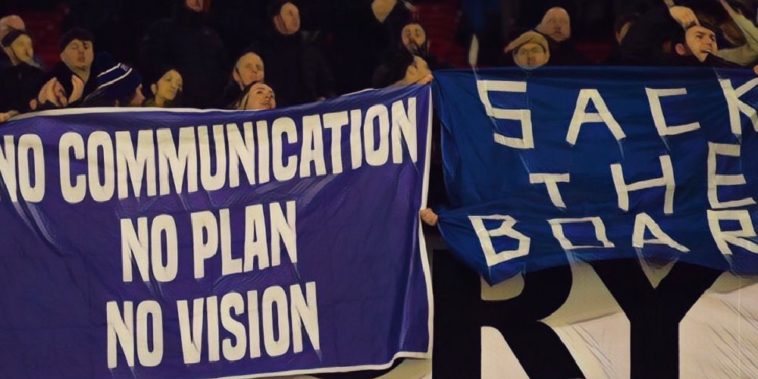 Frank Lampard has urged Everton to not get ‘distracted’ by fans’ protests, while revealing the club are ‘working’ to sign players.

For the second successive season, the Toffees find themselves in a relegation scrap, currently sitting inside the drop zone as we approach the halfway mark after collecting just 15 points from their first 18 games.

Their form, as well as frustrations about the way the club is being run, have seen fans protesting about the club’s board in recent months and years, and while Frank Lampard says that fans have every ‘right to protest’, he urged his players not get distracted by supporter unrest as they attempt to haul themselves to safety.

“I think myself and the players have to be the first that don’t get distracted,” Lampard said at his pre-match press conference. “This is a big game for us in terms of winning the game, the points and what that would do for us.

“As for the fans they absolutely have the right to protest, that’s a real right. I believe they’re coming early to welcome the players to the stadium. We have to think about ourselves and performing and if the fans see that they will react positively.

“My only focus can be to prepare the team against Southampton.”

🗣️ “Myself and the players shouldn’t get distracted by anything. The fans have absolute right to protest.”

Everton take on Southampton in a real relegation six pointer at the weekend. The Saints are without a win in their last seven league outings to sit bottom of the division, though have registered two wins in their last two in the FA Cup and Carabao Cup, most notably, against Manchester City last time out.

“It’s a big game because you’re against a competitor,” Lampard said. “We saw their performance in the week and they were great and we have to respect them for who they are.

“There are a lot of games to come after this. In a way I was pleased to see their performance mid week because we have to respect them. All we have to do is focus on ourselves.

“Every game is different. This is a home game and we have to think about what our strengths are and cause trouble.”

While other side’s around them in the table have already started to strengthen in the January transfer market, the Toffees are working on a limited budget, though Lampard confirmed the club are working to bring in players this month, with the club having been linked to Manchester United’s Anthony Elanga.

“We’re working on certain players, and we have the ones that we really want and if that doesn’t work then we go for others.

“In midfield James Garner is due back start of February. We’re in a decent place in midfield and need to improve in the attacking areas.

“My job is to analyse everything and when Richarlison moved it was hard to replace him. We had a problem defensively and brought players in and that helped. I know how competitive this league is. We have to work within our budget and put out the best team.”