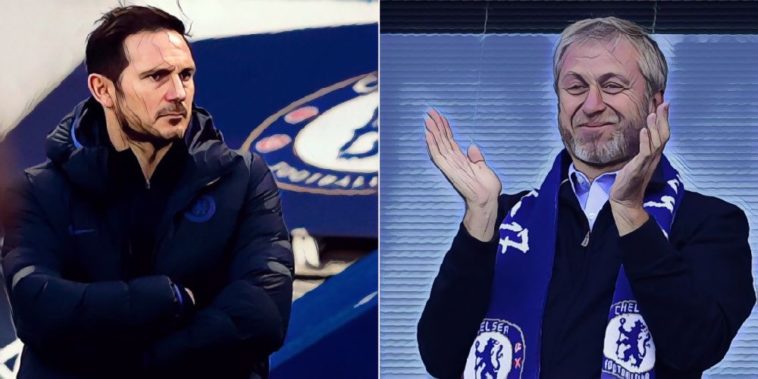 Frank Lampard has insisted he still feels the ‘support’ of Roman Abramovich despite not having been in touch with the Chelsea owner.

Lampard is coming towards the end of his first full season in charge at Chelsea, securing a fourth place finish, while also steering his side into this afternoon’s FA Cup final.

The Blues are also still involved in this seasons Champions League, though face an uphill task to make it to the end-of-season mini-tournament in Lisbon, currently 3-0 down to Bayern Munich going into next weeks last-16 second-leg in Bavaria.

However, Lampard said that he doesn’t feel like he needs to have regular contact with Chelsea’s billionaire owner, Abramovich, insisting he still feels his ‘support’.

“We haven’t been in touch and there’s nothing in that,” he said at his pre-match press conference. “I think my job is to work as well as I can do. After the Wolves result, coming in the top four, I don’t need a phone call or a message or recognition or anything like that. My job when we come fourth is to think about how we come higher than fourth next year and close the gap.

“It’ll be similar with whatever the result will be against Arsenal. I feel the support from the owner. I have felt it from the moment I took the job. I felt it for many years as a player. I am happy if I can make him happy. Last Sunday was a step forward and I want to continue making those steps.”

The 42-year-old is not expecting to hear anything from the Russian in the coming weeks, instead, being in regular contact with sporting director Marina Granovskaia as well as technical and performance advisor, Petr Cech.

“All of that will come through the owner. It’s his club. I am a big boy; I know there are demands. I would always be ready to take any call or have any meeting because this is my life and I am obsessed with how I can get this club to where it wants to be. But I don’t need those calls. I’ll be there if they are to be had.”