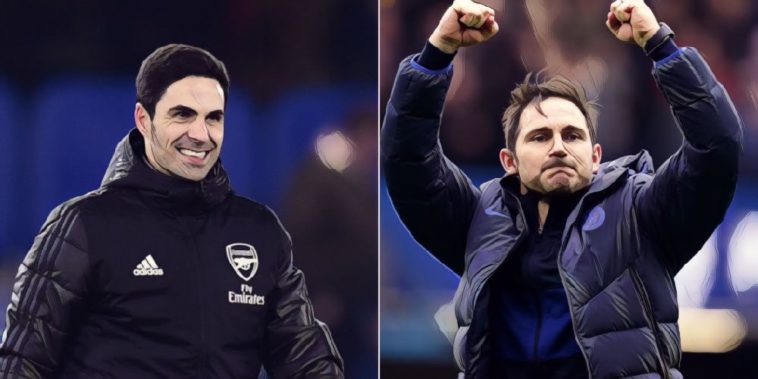 Chelsea boss Frank Lampard has admitted that he has ‘big respect’ for Mikel Arteta and the job he is doing at Arsenal ahead of Saturday’s ‘tough’ FA Cup final.

The two London clubs meet in the final domestic game of this elongated season this weekend, with both having become synonymous with the FA Cup in recent years. The Gunners have won three of the last six finals to take their tally to a record 13 cup triumphs, while Chelsea have won five of the last 13 editions of the historic competition.

Both come into the game with relatively rookie managers in the dugouts, with Mikel Arteta having only taken his first role as a head coach back in December, leaving Lampard – also in his first top-flight role as a manager – to admit his ‘big respect’ for what his opposite number has achieved so far.

“I think he’s done a really good job since he’s been there,” Lampard said at his pre-match press conference. “I know that feeling of trying to lay down messages, keep trying to drill things home, make relationships and see where you want the club to be taken forward. From the outside, I’ve got big respect for the way he’s done his job.”

Arsenal qualified for the final against the odds by beating reigning cup holders Manchester City in the semi’s two weeks ago, with Lampard expecting a ‘tough match’ at Wembley on Saturday.

“I wasn’t surprised that they won the game,” he insisted. “Man City were probably most people’s favourites – they are in pretty much every game they play – but I knew with the collective and individual talent Arsenal have that they had the capabilities to win a game like that.

“It’s a game I’ve paid close attention to but every game is different. They’ve had other results recently and played in different formations so we have to be ready for any eventuality but we also have to know that Arsenal are going to be a very tough match.”

For Chelsea, the game is solely about adding to their impressive collection of silverware, though for Arsenal it also has the added bonus of offering a place in next season’s Europa League, the north Londoners having missed out via their league position.

The situation has similar connotations to when the side’s met in last season’s Europa League final – with Chelsea’s 4-1 victory in Baku denying Arsenal a place in this season’s Champions League – though Lampard refused to be drawn on whether the situation gave Arsenal extra incentive, insisting a win would mean everything to the Blues.

“I’m not sure what pressure it adds in terms of whether it becomes a positive or a negative,” he added. “That’s their problem as far as I’m concerned and it’s a good problem for them because they can get into Europe via the game.

“We must make sure that our mentality – whether we’ve qualified for the Champions League or not last week – is not affected negatively in any way from that. This is a game that means a lot to us. It means everything to us.”

Lampard also confirmed that senior stars N’Golo Kante and Willian are available for Saturday’s clash, though Ruben Loftus-Cheek is out after picking up a problem in training on Thursday.