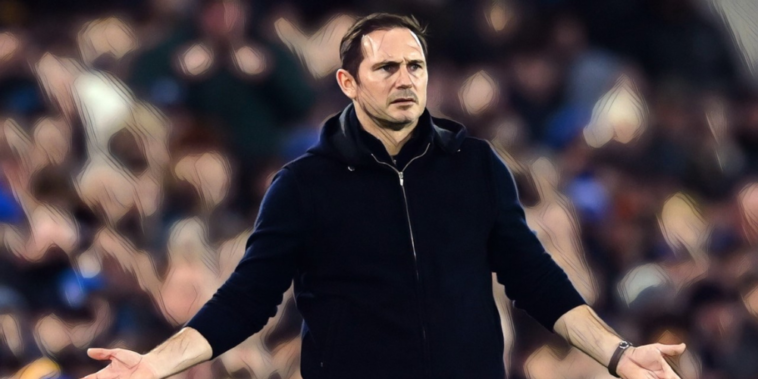 Frank Lampard admits he can’t control the talk around his future at Everton following the club’s humbling home defeat to Brighton.

Everton were thrashed 4-1 at Goodison Park on Tuesday evening in a defeat which leaves the Toffees mired in relegation trouble, with the club just a point above the Premier League’s bottom three.

The confidence gained from a battling draw against Manchester City last weekend evaporated on Merseyside, as Brighton scored three goals in just six second-half minutes to take the game away from Lampard’s side.

Individual errors contributed to a woeful home performance from Everton, who are without a win in six Premier League games and have lost seven of the past ten. Lampard’s position as manager has been questioned, but the Everton boss insists he cannot control the outside noise regarding his future.

“Since I have been here we have been in this situation of a relegation battle, last year and through this season. It is not a case of fear [for my job], it is a case of keep working,” Lampard said post-match.

“I cannot control the talk or the decisions when you are around this area of the table. This is what happens. When you lose a game like this, I absolutely understand any reaction. I don’t listen to too much of it because if you do it becomes your focus point.”

Lampard was asked about how he addressed the dressing room after a damaging defeat at home, but refused to reveal the details of the talks he held with his squad.

“I don’t think it is time to go into the dressing room talk. It is about personal responsibility and that is down to every player and myself. What could I do better? What can you do better the next time?

“I have seen enough on Saturday [in the 1-1 draw at Manchester City] in terms of parts of the performance [to believe I can turn things around]. What isn’t good enough is the consistency to get results. The first half I didn’t hate but the six minutes is not good enough from us and if you are going to perform like that defensively then you will lose games.”