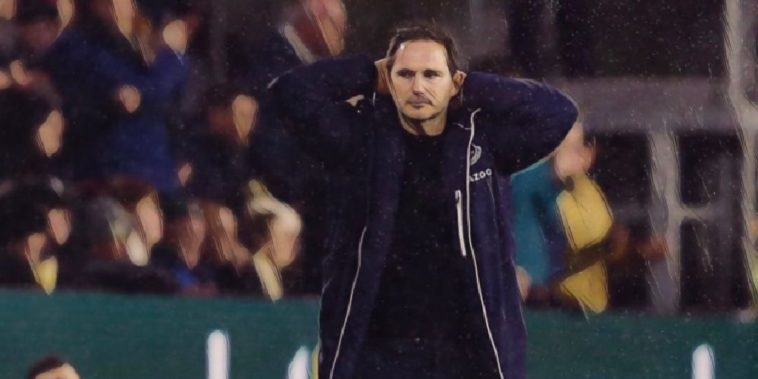 Everton’s hopes of survival were handed a huge blow as they surrendered a 2-1 lead to lose 3-2 at relegation rivals, Burnley.

It was a huge six-pointer towards the bottom of the Premier League, the two sides coming into the game separated by four points and struggling for form.

It was Burnley who opened the scoring in the 12th minute, taking advantage of some woeful defending at a corner as centre-back Nathan Collins finished from inside the six-yard box for his first goal for the club.

Minutes later though and Everton would be handed a reprieve, Anthony Gordon was brought down by Josh Brownhill in the area before Richarlison stepped up and rolled the resulting spot-kick past Nick Pope.

The goal really seemed to settle the Toffees, and as the game ticked towards the half-time interval, they would be awarded another penalty, Vitaly Mykolenko being brought down by former Evertonian Aaron Lennon. Once again, Richarlison stepped up, and again sent Nick Pope the wrong way with a cool finish.

Everton twice hit the woodwork in the early stages of the second half, and they would be made to pay for their missed chances as Burnley pulled themselves level just before the hour mark. Left-back Charlie Taylor did well down the flank to get past Jonjo Kenny, drove into the area before his low cross was despatched from close range by Burnley-native, Jay Rodriguez.

With just five minutes to go, Burnley would complete the turnaround, and once again, it was more woeful defending that was the downfall of Everton. Taylor’s cross from the left fell straight to Ben Godrey, though despite not being under pressure, his attempted clearance was truly dreadful. Substitute Matej Vydra pounced on the loose ball, pulled it back to Maxwel Cornet who fired home to give the Clarets a potentially vital three points in their bid to avoid the drop.

The result leaves the two sides separated by just a single point, with Everton just outside the drop zone, and speaking after the game, Frank Lampard blamed his side’s ‘individual mistakes’.

“It’s the points isn’t it? We’re now a point ahead of Burnley. We knew the rules before the game if you win it you have a nice little gap. That’s the situation.” he told BBC Sport.

“It’s football, in three days we have to recover for our next game. We had mistakes for their goals and mistakes in not being clinical enough to take the numerous chances that should have had us clear at that point.

“But 2-1, the way we were playing in the second half was for us to go and score and make it 3-1. We don’t do that. Then we just concede from individual mistakes.

“I anticipated the atmosphere, because of the league positions, I expected that and I thought we handled it well in the first half, particularly the reaction to going 1-0 down.

“With the first half we could be relatively happy. You have to deal with certain things coming to Burnley, particularly on a night like this. I thought we dealt with them well in the first half. But those crucial moments in the second half changed the game.

“There are nine games where we have to give absolutely everything, every ounce that we have. I will certainly do that and everybody has to do the same. It doesn’t feel nice tonight, but we have to understand we have a game in three days time and more games after that to get enough points to stay in this league. That’s what’s there to fight for.”