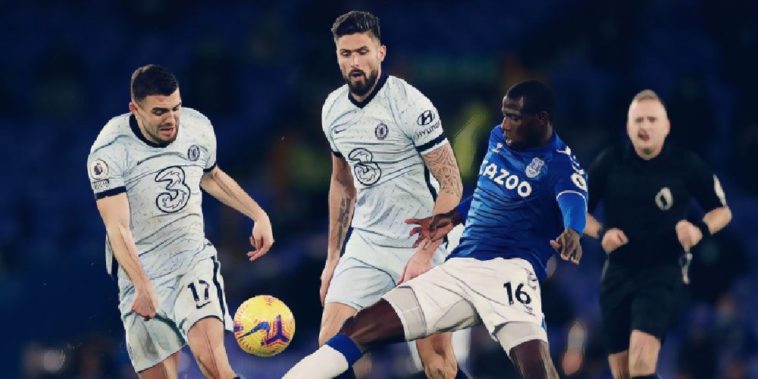 Chelsea’s 14 match unbeaten run came to an end after they slipped to a disappointing 1-0 loss to a determined Everton side.

Frank Lampard’s side have been tipped as potential title contenders in recent weeks after seemingly finding a balance between defensive solidity and attacking output.

However, they came up against an Everton side that looked energised by the return of supporters to Goodison Park, who, despite only being 2,000 strong in number, made their voices heard throughout.

The hosts took the lead on 22 minutes, a long punt upfield from Jordan Pickford finding Dominic Calvert-Lewin, the England international striker getting to the ball first before being wiped out by Edouard Mendy. Gylfi Sigurdsson stepped up and sent the Senegalese the wrong way as he confidently rolled the ball home from the resulting spot-kick.

Chelsea had their chances throughout their game and twice hit the woodwork, but Frank Lampard’s side were constantly met by a dogged and determined Everton backline. Michael Keane was particularly impressive at the back, making nine clearances as Chelsea tried to probe from all angles, but ultimately failed to register a single shot on target in the second half.

Speaking afterwards, Frank Lampard summed up his side’s performance as ‘not good enough’, before labelling talk about a potential title challenge as ‘ridiculous’

”First 20 minutes were key for me, I knew it was coming, longer balls and second balls for a team needing a win. When you go 1-0 down, it absolutely suits their gameplan. We hit the post twice but for our levels and what we have been recently, not good enough.

“I would not say energy or desire wasn’t there, we were just off it. The lads are gutted because we were on a good run. If they are going to make it difficult for you, don’t concede from a long ball, second ball situation. We have been getting down the sides, the quality of crosses has been good and it wasn’t today. Credit to Everton.

“I don’t think Eduoard Mendy was just culpable but he has been outstanding so far so I will take that. When teams play long with one of the best strikers in the league, you have to suffer the moments and get through. Disappointed we did not have enough to unlock the door.

“It is a long season and these people talking about us winning the league [and having the] best squad, it is ridiculous. You have to look at the teams winning it last three or fours years, they have wingers, strikers scoring 30, 40 goals and league, Champions League winners.

“Coming here to this place, they were up for a result and we did not pass the test. We will in the future.”

The prevented Chelsea from ending the day at the top of the table, the west London club facing a tricky trip to face Wolves in midweek before hosting West Ham at Stamford Bridge next weekend.