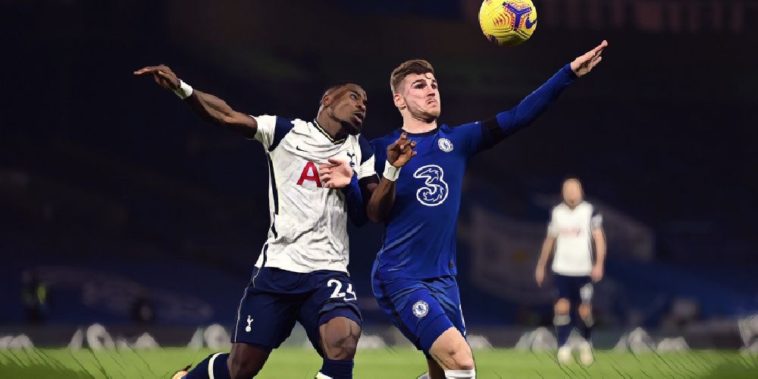 Chelsea and Spurs played out a goalless draw at Stamford Bridge in a London derby that won’t live long in the memory.

Before the game, many would have predicted that Chelsea dominate the ball and for Spurs to be happy to sit back and wait for space on the counter, and that’s exactly how the game panned out with each knowing that a win would take them top of the table.

Chelsea thought they had taken the lead in just the 11th minute, Mason Mount playing in Timo Werner in the left channel, with the German expertly curling his effort beyond Hugo Lloris, only to see the flag raised for a marginal offside.

The Blues were the most adventurous and created the vast majority of chances, continually probing down the right with crosses from Hakim Ziyech and Reece James, although Hugo Lloris was only really tested by a long-range Mason Mount effort, with Tammy Abraham particularly wasteful in front of goal.

Overall, it wasn’t a game that will live long in the memory, and even when both sides made defensive errors in the dying embers, neither side were able to take advantage, Olivier Giroud and Giovani Lo Celso spurning the opportunity to steal the points in stoppage time.

Speaking afterwards, Frank Lampard was also unsurprised with the pattern of the game, insisting his players ‘did everything’ he asked of them – apart from put the ball in the net.

5 – Édouard Mendy has kept five clean sheets in the Premier League this season, the most of any goalkeeper. Presence. pic.twitter.com/P5Jg88ZJ0N

“It went as I sort of expected,” Lampard admitted to Sky Sports. “I thought we’d have a lot of possession. We created enough to win the game. The clean sheet factor against a side set up to counter-attack – that was excellent. We didn’t give Kane or Son a sniff. Goalkeeper makes a great save from Mason Mount.

“Oli Giroud gets his chance. He won us the game midweek [against Rennes] and is the man you want in those positions so I can’t be too critical. We dominated the game possession-wise. This Tottenham team make it hard for you so the way we handled it was brilliant.

“In the end of the season, it will all come together if this was a good point or not. I am happy with the clean sheet but in actual gameplay, we should win it. The players did everything I asked from them but we didn’t get that last bit.

“Another day, with the attacking players we have. Sometimes you need a bit of magic from your creative players. The handbrake was a tiny bit up but in a good way.”

Next up for Chelsea is an away trip to face Sevilla in the Champions League, and while both have qualified for the knockout stages, both will still have eyes on securing top spot in Group E.

See also – Icons: Ten of the greatest footballers ever to wear the number 10 shirt