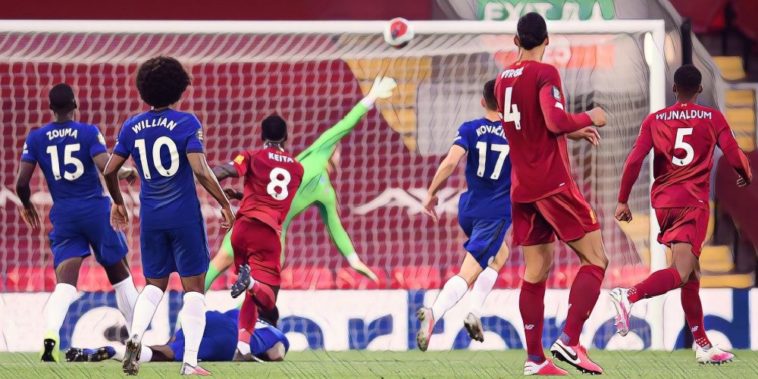 Chelsea were denied the chance to secure their place in next season’s Champions League, the Blues finding themselves on the wrong end of a pulsating 5-3 scoreline against champions Liverpool.

With Manchester United having laboured to a 1-1 draw against West Ham earlier in the evening, Chelsea knew that a point in either of their last two games would secure a place in Europe’s elite competition next season

However, ahead of lifting their first league title in 30 years, Liverpool looked determined to go out with a bang, and on 23 minutes, Naby Keita hammered the Reds ahead, his rasping strike from 20 yards sweetly pinging in off the underside of the bar.

Having scored a superb free-kick at Stamford Bridge in the reverse game, Trent Alexander-Arnold repeated the trick with yet another superb set-piece, curling the ball around the wall from all of 25 yards to once again exploit Kepa Arizabalaga’s apparent weakness from distance.

Georginio Wijnaldum made it three as Chelsea failed to deal with a Liverpool corner, only for Olivier Giroud to continue his fine goalscoring form to pull one back on the stroke of half time, the Frenchman tapping home from close range following an Alisson save.

Roberto Firmino made it 4-1 after 10 minutes of the second half, before a Christian Pulisic inspired Chelsea looked to stage a comeback.

Having come on as a second-half sub, Pulisic brilliantly breaking down the left before putting one on a plate for fellow sub Tammy Abraham on the hour mark, before the American scored one of his own, smartly controlling the ball on the penalty spot, before firing past Alisson following some uncharacteristically slack Liverpool defending.

Chelsea pushed for an equaliser that would have guaranteed their place in next season’s Champions League, but found themselves punished on the break. Sadio Mane scampered away down the left before feeding Andy Robertson, the Scot putting in a lovely cross that was tucked home at the back post by Alex Oxlade Chamberlain to round off a sensational evening of goalscoring action.

“It was extraordinary, even when you say they that started to run away with it I thought we were in it,” Lampard told Sky Sports.

“In match-play we were OK. They’re a fantastic team and we can’t afford to make those mistakes. If we don’t concede a fifth I thought we were coming.

“We have to suck this in and accept it here tonight because it’s where we want to get to.”

The result saw Chelsea slip to fourth ahead of their final-day fixture against Wolves at Stamford Bridge, while Manchester United travel to the Midlands to face Leicester, all three teams separated by a point.

“It’s huge, we know the situation, it’s in our hands to get a result against a very good Wolves team. To get where we want to be the pressure is what we should have.”