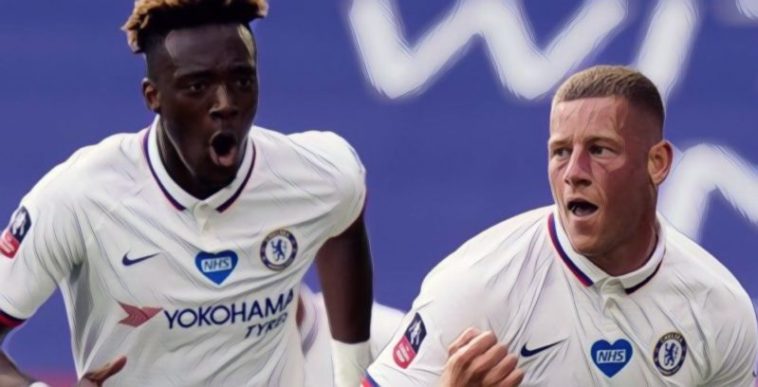 Chelsea progressed to the semi-finals of the FA Cup after Frank Lampard’s side beat Leicester 1-0 in a tight encounter at the King Power Stadium.

Despite coming into today’s fixture of the back of an impressive win over Man City on Thursday, Chelsea started sloppily, and Leicester could have easily found themselves with an early lead had they shown a bit more composure in forward areas.

However, on the half-hour mark, the best chance of the opening period would fall to Chelsea, Christian Pulisic finding himself in space 12 yards from goal, although Foxes keeper Kasper Schmeichel was equal to the Americans fierce drive.

Leicester top scorer Jamie Vardy got in behind the Chelsea defence in trademark fashion on the stroke of half-time although the 33-year-old uncharacteristically scuffed his left-footed effort wide of the target.

Chelsea boss Frank Lampard clearly wasn’t happy with his sides first-half display, the former Blues midfielder hooking young trio Mason Mount, Billy Gilmour and Reece James at the break, and it was one of the replacements, Ross Barkley, who made the breakthrough on 63 minutes, the England midfielder timing his run into the box before stroking Willian’s whipped cross on the volley.

Brendan Rodger’s Leicester side piled forward in search of an equaliser as the game entered its final stages, but they were unable to create the kind of clear cut chance they craved and had to accept that their FA Cup dream would end at the quarter-final stage for the fifth time in a row.

Speaking afterwards, Blues boss Lampard admitted his team had been below par for large parts of the game, although he was ultimately pleased to see his side progress to the final four.

”We weren’t our usual selves today. We were below what we usually produce. But I am happy with the result. We won the game and must learn from some of the mistakes in our game.

“I don’t want to sound too down after this. You have to show the grit to get a win when you don’t play well. We go on to the next one. We can park the Cup and focus on getting the league wins to be in the Champions League.”

When quizzed on his decision to take off the three youngsters at half-time Lampard insisted it is all part of a learning curve for the trio and backed them all to go on and have long and successful careers with the Stamford Bridge outfit.

“It is a learning experience. I could have taken more off, or other players off. I am not pulling those out on their own,” Lampard revealed.

“The gaffer said that the first-half was simply not good enough to wear the Chelsea badge. We needed to fix up.”

”They will be top players for this club and have top careers. But if I have to do something in games I will do it. It was one of those games where I had to do something. They will take it on the chin.

“We were gifting Leicester space and ease to win the ball back. We are fortunate they didn’t take those chances. All thee subs, in their own way, livened up the performance.”

Read – Tweets of the Week: Liverpool, Neil Warnock and Bale the troll