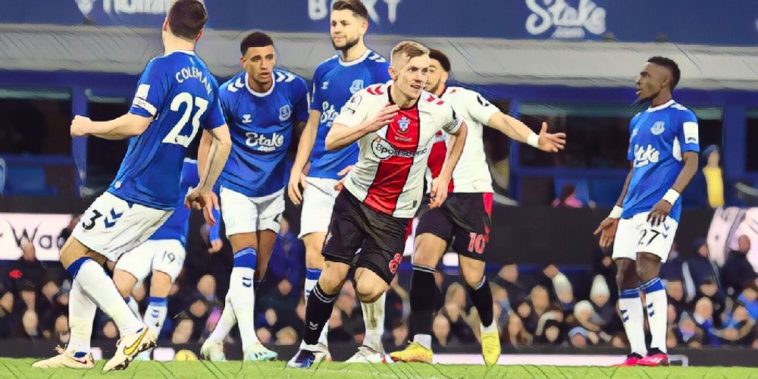 Frank Lampard says he wants to ‘get things right’ at Everton despite their 2-1 loss to fellow relegation strugglers, Southampton.

Having survived relegation by the skin of their teeth last season, the Toffees find themselves embroiled in yet another battle to beat the drop this time out, and came into this weekend’s game with bottom club Southampton inside the relegation zone having picked up just 15 points.

Everton’s fans have grown increasingly frustrated at the club’s hierarchy in recent months, culminating in the board members being advised to stay away from Goodison Park for their own safety at today’s clash.

Everton did open the scoring in the first half as Amadou Onana nodded home unmarked from a Demarai Gray corner, only for Southampton to turn it around it around after the break to boost their own relegation survival hopes.

Within 60 seconds of the second half getting underway, James Ward-Prowse produced a lovely finish from 12 yards out after showing some tidy control and composure as he received the ball, before the Saints skipper then despatched the latest in his catalogue of superb free-kicks to seal all three points.

Everton did have chances to add to their tally, though were wasteful in front of goal, and speaking after the game, under pressure Blues boss Frank Lampard said he was pleased with his side’s passion, but said they must take their chances.

“There is no questioning the passion,” he told Sky Sports. “It was a difficult game because of two teams not where we want to be, fighting it out. We had our chances and didn’t take them. It can be like that. It is an unfortunate day. We have to take responsibility, myself first. We have to do better.

“We were OK in the first half. We played quite direct and had an idea of what we wanted to do. I said to the players ‘this is not a huge tactical game, it is more of sticking together and continue with the right effort’. The fans here relate to that. The goal after half-time changed the game.”

Everton now have just one win and two draws from their last 11 Premier League fixtures to leave them 19th in the league, level on points with today’s opponents.

Despite the question marks surrounding his future, Lampard said he was determined to ‘get things right’ at Goodison Park and emulate last season’s great escape.

“When you take this job you understand the nature of it,” he said. “I want to get things right here. I will try and do the best job I can possibly do.

“We had amazing times last year staying up when people thought we would be relegated.”

Read – Boehly’s Bonanza: Every player Chelsea have signed since their American takeover

Read Also – 10 players sent off on their Premier League debut