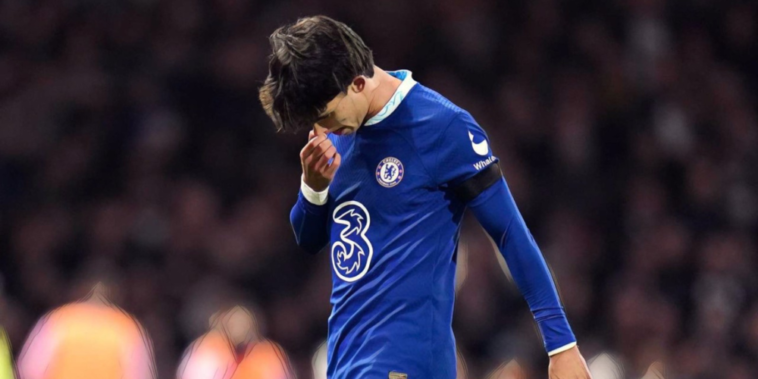 Joao Felix’s debut for Chelsea lasted less than an hour, as the new arrival was sent off at Fulham for a high challenge on Kenny Tete.

It was far from the dream debut Felix would have envisaged when unveiled as a Chelsea player this week, having been parachuted in on loan from Atletico Madrid with the task of saving the Blues’ stuttering season.

Felix is not the first player to have earned his marching orders on his first appearance however, here are ten players who were sent off on their Premier League debut.

Michael Brown developed a reputation as a hard-nosed midfielder during his Premier League career, proving a stubborn opponent as he ruffled the feathers of opposition engine rooms.

No stranger to the referees’ notebook with 49 cautions in 194 top-flight games, his first red card was perhaps a little harsh as the teenager was dismissed for hauling down Andy Impey as the last man.

The 18-year-old had been introduced as a substitute during Manchester City’s 1-0 loss at QPR, but lasted just 12 minutes before heading back down the tunnel for an early bath.

The man, the myth, the Manchester City legend.

Christian Negouai retains a special place in the folklore of the Citizens. The Frenchman was hailed by Kevin Keegan – no stranger to excitability – as ‘the most exciting player’ he had ever signed upon his arrival into English football.

It did not turn out as planned.

His ten-game career with the club included punching the ball into the goal on his home debut, two red cards, and a missed drugs test, with Negoouai a magnet for chaos.

This has to be the funniest one.

Man City's Christian Negouai was sent off THREE minutes into his Premier League debut. He would never make another PL appearance again in his career 😂 pic.twitter.com/FdZYAuKFhG

Just one of those appearances came in the Premier League, with his top-flight career lasting the grand sum of just three minutes. After bundling into Marcus Bent in a Boxing Day clash with Everton, Negouai was sent off. He never made another Premier League appearance.

Tomas Repka is not the sort of man you’d like to meet down a dark alley.

The steely centre-back patrolled Premier League pitches like a man possessed on occasion, with the Hammers’ hard-man more often than not a little worked up.

Repka’s career at West Ham began in infamous fashion, as he was sent off for two bookable offences in a debut defeat at Middlesbrough.

After serving his suspension, he returned to the side and was promptly sent off once again in his third appearance as the Hammers were thrashed 7-1 at Blackburn.

He racked up 20 red cards during his professional career and later served two jail terms, the first for advertising sexual services on the internet in the name of his ex-wife…

West Brom returned to the top division for the first time since 1986 ahead of the 2002/03 campaign, with the Baggies given a tough start with a trip to Manchester United.

Gary Megson’s spirited side put up an impressive performance to frustrate the hosts, but their hard work was undone when captain McInnes was shown a red card.

The midfielder had been booked just a minute earlier, before being shown a straight red for a two-footed lunge on Nicky Butt. The Premier League’s most notorious super-sub, Ole Gunnar Solskjaer, came off the bench to snatch a win for the home side at Old Trafford.

Cisse coached his home nation to a first ever AFCON title in 2022, before leading Senegal into the World Cup quarter-finals for just the second time in Qatar last winter.

He’s not held in quite the same esteem in Birmingham though, for who he made 36 Premier League appearances across two seasons. He was sent off on his debut at Arsenal, though the red was later rescinded, and Cisse continued to collect cards at an astonishing rate.

The midfielder was booked five times in his first six games and had been cautioned ten times in the Premier League before the New Year.

Iain Turner holds the unwanted record for the fastest debut red card for a player in the starting side.

The goalkeeper was dismissed just nine minutes into his first Premier League appearance for Everton, after handling Alan Stubbs’ header outside his own penalty.

Fortunately for Turner, James Beattie’s first-half header secured a 1-0 win for Everton, who despite their man disadvantage produced a resolute performance.

Eager to impress off the bench on his Sunderland debut, the North East native went a little OTT in his attempts to make an impact.

Sunderland were chasing the game in a final day fixture at Wolves, when Colback was introduced from the bench. Already down to 10 men after Michael Turner’s red card, Colback joined his dismissed teammate in stoppage-time after picking up two bookings in quick succession.

He later became the first player in 17 years to cross the Tyne-Wear divide, after leaving Sunderland to sign for Newcastle on a free transfer in 2014.

Laurent Koscielny received his marching orders on debut for Arsenal, as the centre-back picked up two yellow cards in stoppage time on the opening weekend of the 2010/11 season.

The French centre-back had earlier been involved in a red card for another debutant, as Joe Cole was sent off on his Liverpool bow for a lunge on Arsenal’s new recruit.

Koscielny was stretchered off but returned after the break, only to receive his own red card for two needless bookings late on.

For the second successive season, a summer signing for Arsenal was sent off on their Premier League debut.

Gervinho had been welcomed to the Premier League by one of the division’s pantomime villains and was sent off after reacting to the antagonistic Joey Barton.

The Ivorian was shown a red card with 14 minutes remaining of a goalless draw at St James’ Park when he slapped Barton after the pair had tangled.

Joao Felix is the latest name to have been sent off on his Premier League debut, with the Chelsea loanee’s lively first performance set to be remembered for the wrong reasons.

Felix’s arrival on loan from Atletico Madrid was described as a ‘lift’ by Graham Potter this week, but the west Londoners now face three games without the forward as a result of his red at Fulham.

After a bright start to the game, the Portugal international’s high lunge on Kenny Tete was punished with a red card as Chelsea slipped to defeat in the west London derby at Craven Cottage. The defeat extended the club’s poor form to one win in nine games, with the pressure on Potter to turn things around and quickly.

João Félix is shown a straight red on his Chelsea debut… pic.twitter.com/jn3MKtoHwn

Felix will watch on from the sidelines in the coming weeks as Chelsea look to address their slump in performances.