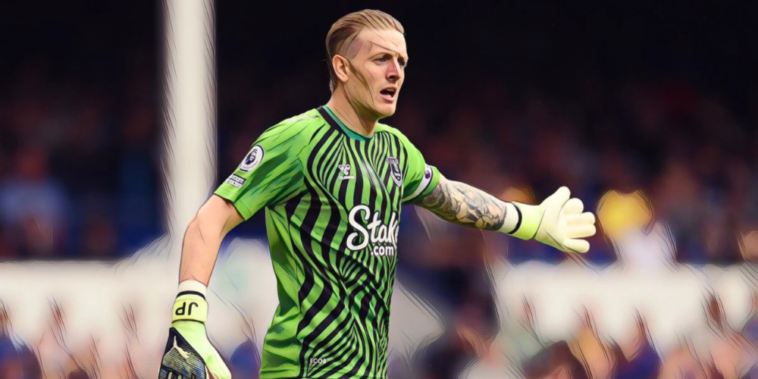 Frank Lampard believes Everton can match Jordan Pickford’s ambitions as the club look to agree a new contract with the goalkeeper.

Pickford is in negotiations with Everton over an extension to his current deal, as the Toffees look to ward off interest in the England international.

Tottenham have been linked with a move to sign the 28-year-old, who has been England’s number one in three consecutive major tournaments and won his 50th cap for the Three Lions at the World Cup in Qatar.

Manchester United and Chelsea have also been credited as admirers, but Lampard has insisted that Everton are capable of matching the shot-stopper’s ambitions.

“I feel we can. I don’t think it’s straightforward to look at any individual and understand what their ambitions are,” he told a pre-match press conference ahead of Everton’s clash with Wolves.

“Jordan is England’s number one and has secured that position, which has been an amazing achievement because we know how difficult that is. He’s played at Everton and was a huge reason why we had a great run towards the end of last season and stayed in the league.

“Everyone knows Jordan was a massive part of that. I don’t want to speak for him but Jordan feels very happy at this club. That’s the impression I get.

“We are a huge club with a big history and big ambition and he is a big part of that. Maybe I was fortunate to play Champions League a lot but when I felt comfortable at a club I came in with a smile on my face every day and I looked forward to every game and if Jordan feels like that and we can match each other’s ambitions, I don’t see that as a problem.”