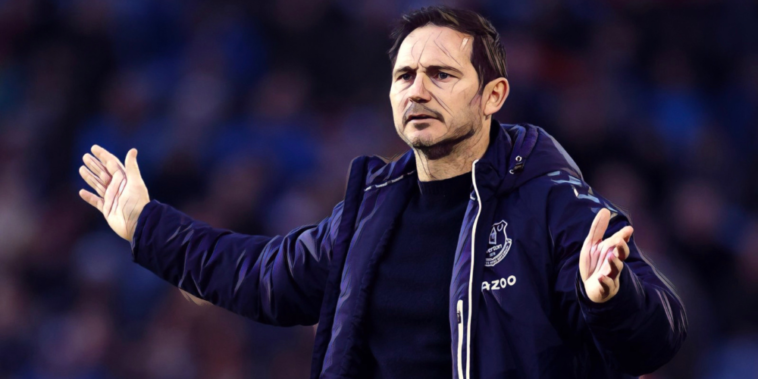 Frank Lampard has discussed Everton’s goalscoring struggles as Dominic Calvert-Lewin prepares to return to the squad.

Everton travel to face Manchester City in the Premier League this weekend with the Toffees hovering nervously above the division’s bottom three after a run of four consecutive defeats.

Lampard’s side have scored just once in those four games and only two teams have scored less than their 12 goals in the Premier League this season. Everton will be boosted by Calvert-Lewin’s return this weekend however, with Lampard confirming at his pre-match press conference that the forward is fit to feature.

“He’s in the squad. Yes,” Lampard said, though he couldn’t confirm if he would start: “We will see,” he added.

Lampard discussed his side’s lack of goals and believes the sale of Richarlison and Calvert-Lewin’s continued fitness issues have impacted his side; the latter having started just four league games this season.

“We’ve gone into a season where we’ve lost Richarlison and we haven’t really had Dominic, barring a few games,” he said. “I think you’ve seen what he can do against Crystal Palace and other than that we haven’t had him. It’s not for the want of trying. It’s injuries.

“It’s understandable that when you lose that firepower, it might not be easy to replace in terms of pure goals and output. So having Dominic back in the fold is a great thing for us, because players who can make a difference at the top end of the pitch like that mean points. It’s as simple as that.

“We’ll look to see what we can do in the January transfer window. Not just specifically about Dominic as a number nine, but what options do we have to start a game or change a game, to bring on from the bench? We have to look at it that way, but we have to do it within our own parameters.”

Lampard’s focus for the winter window is set to be on signing a centre-forward, with Salomon Rondon having departed the club by mutual consent earlier this month. Asked if he had identified any players that fit the bill, Lampard added: “Yeah definitely. Lot’s of players.”