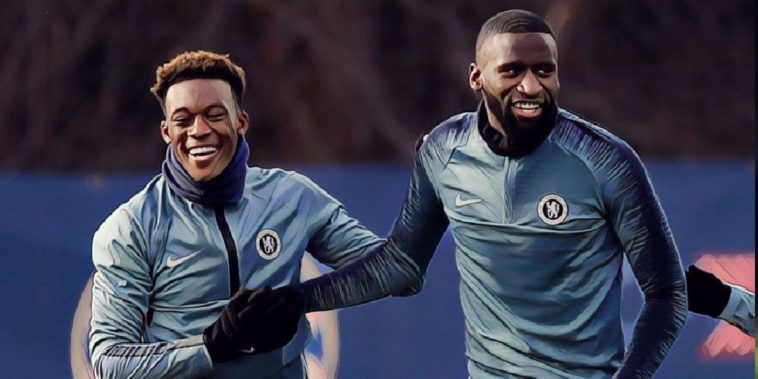 Frank Lampard remained coy on the futures of Antonio Rudiger and Callum Hudson-Odoi amid continued speculation linking the duo with a Chelsea exit.

The futures of both players are in serious doubt following Chelsea‘s lavish summer of spending, the west London side boasting a squad packed full of talent after splashing more than £200m on a host of marquee arrivals.

Germany international Rudiger was an unused substitute for the club’s opening weekend win at Brighton before being left out of the squad to face Liverpool last weekend, the defender one of five centre-back options currently available to Lampard following the summer signing of Thiago Silva.

The 27-year-old is reportedly considering his future as he bids to make the Germany squad for next summer’s European Championships, whilst Chelsea could look to move on several players as the Blues look to trim a bloated squad.

Hudson-Odoi is another player who faces an uncertain future after playing just 10 minutes of the club’s opening two fixtures, the winger struggling for opportunities despite the absence of both Christian Pulisic and Hakim Ziyech through injury.

The teenager was targeted by Bayern Munich last year before signing a new long-term deal at Stamford Bridge, but he has failed to build upon that initial promise following a frustrating spell for the academy graduate.

Bayern have been tentatively linked with renewing their interest in the thrice-capped England international, whilst both Juventus and RB Leipzig have been reported as admirers of the 19-year-old.

Lampard, however, refused to comment on the duo when asked if either player will leave during the current window, but suggested he is ‘open’ to conversations with players keen to clarify their futures before the deadline next month.

“I’m going to skirt around that question,” he said at a press conference on Tuesday. “We’re not in a period where the transfer window is acting like it has done in recent years. The competitive games have just started. I’m very open to those conversations with the players as the next couple of weeks go on.

“My priority will be making sure I maintain the strongest squad I can but after that the individual conversations will happen. I will try and make sure I go into the season once the window shuts with the squad I feel is competitive in a healthy way.”

Chelsea hope to make progress in the Carabao Cup the evening, vying for a place in the fourth round against Championship outfit Barnsley.