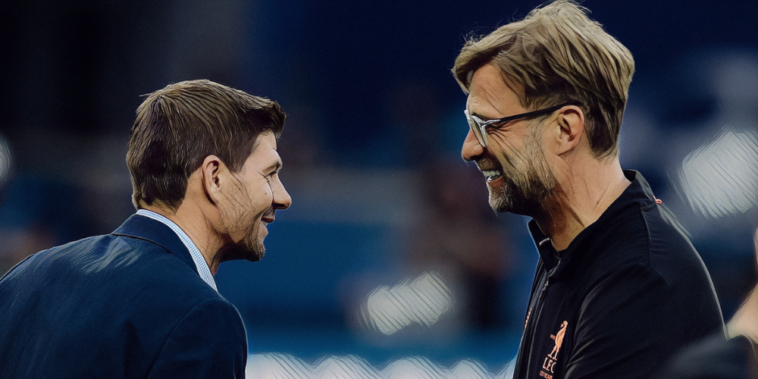 Jurgen Klopp has praised Steven Gerrard as the former Liverpool captain prepares for his first return to the club as an opposition manager.

Liverpool face Aston Villa in the Premier League tomorrow, a fixture what will see Gerrard return to his former side for the first time, having left Scottish champions Rangers to take charge at Villa Park last month.

Gerrard began his coaching career in Liverpool’s youth system under the watchful eye of Klopp, who has described the return of the former favourite as a ‘wonderful story’ ahead of the reunion.

Klopp was full of praise for the 41-year-old and described Gerrard as a ‘great guy’, though believes the former club captain will be going ‘full throttle’ to earn Aston Villa a positive result on his sentimental return to Merseyside.

“A wonderful story, I can imagine a little bit how he’s feeling,” Klopp said at his pre-match press conference.

“I know [Gerrard] said ‘no sentiment’, he’s an experienced coach, he’s been doing the job for a while and he knows exactly how to approach games.

“But he has no idea how it will feel when he steps into the stadium or out of dugout. I had that in a similar way the first time I went back to Mainz.

“It’s strange, you like all the people you meet and that’s not always the case when you go somewhere but I could handle it and Stevie will handle it.

“He is friends with 99.9% of people working for Liverpool FC and the 1% never met him.

“I’ve never heard a negative word about Steven Gerrard since I’ve been here, I’ve met him, he’s a great guy but he will want to come here and win the football game.

“So before shake hands, after shake hands and in-between he will go full throttle.”