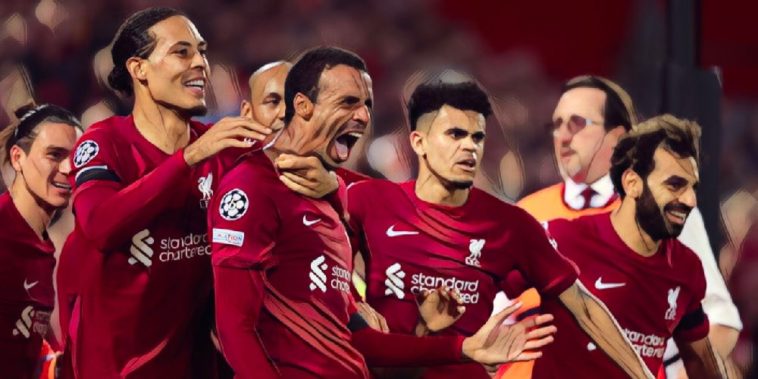 Liverpool got their Champions League campaign up and running with a 2-1 win over Ajax at Anfield.

Liverpool’s season has started in indifferent form, with their last outing seeing them somewhat humiliated in Matchday 1 of the Champions League, being comprehensively beaten by Napoli.

The Reds started the game on the front foot though and took the lead in the 17th minute. A long ball up field from Alisson was flicked on by the head of Luis Diaz into Diogo Jota, before the Portuguese moved the ball along the front-line to Mohamed Salah, who, after taking a touch, slotted past Remko Pasveer to end his mini-goal drought.

The lead would only last 10 minutes though, as Ajax constructed a lovely team move before equalising. The Dutch champions demonstrated their confidence and patience in possession before they picked out the run of Steven Berghuis down the left in-behind the Liverpool back line. The 30-year-old picked out Mohammed Kudus in the box, before the Ghanaian unleashed a thunderous strike into the top corner that went in off the underside of the bar.

Liverpool had the lion’s share of possession and chances in the second half, but often found their end product just lacking in front of goal.

With just one minute to play though, Jurgen Klopp’s side eventually found a way through to secure their first three Champions League points of the campaign, Joel Matip rising highest to meet a Kostas Tsimikas corner and head home, goal-line technology confirming that the ball had crossed the line after an Ajax player had cleared it from within the goal.

Speaking after the game, Jurgen Klopp felt his side should have scored more in the game, but admitted that their recent setbacks impacted the performance at times.

“I think everybody could see that we understood and that we had to put a completely different shift into the game. The boys did that,” he told BT Sport.

“We played a lot of good stuff against a hard-fighting opposition. Scored the first goal and should’ve scored more goals, from set pieces especially.

“I’m not sure it was their first attack, but Ajax didn’t have a lot. That’s how it is in our situation, anything can happen, but it was an incredible strike from [Mohammed] Kudus.

“It’s like another test. Everybody is hoping you go in the right direction and then you get another setback. You could see the impact of that. The pressing before the goal was much better than after the goal. Only a yard or two but if we press, we have to do it right.”

The German was pleased with the togetherness his side showed in their celebrations for Matip’s late winner, but said the win is just the ‘first step’.

Joël Matip powers home a header and the Reds are minutes away from a vital win 🙏#UCL pic.twitter.com/IgHjmy2FH3

“I’m not picky [who scores], in that sense. It was a nice celebration that showed pretty much everything about what the boys thought today.

“Nothing is over. It is a first step, a very important step. Now we have a strange break, pretty long. Brighton is waiting.”

Asked about Ajax getting in behind Liverpool’s back line too easily – a criticism that has been thrown at his side several times this season, Klopp said: “I have to watch it back. I thought we dealt really well with that, in that situation not, but that will always happen in football.

“If Ali [Alisson] has to make a save, then something went wrong beforehand. I understand that we talk about little details but for us it’s not that important because it’s about conceding a chance, which can always happen, and then getting back to what it should’ve been.”