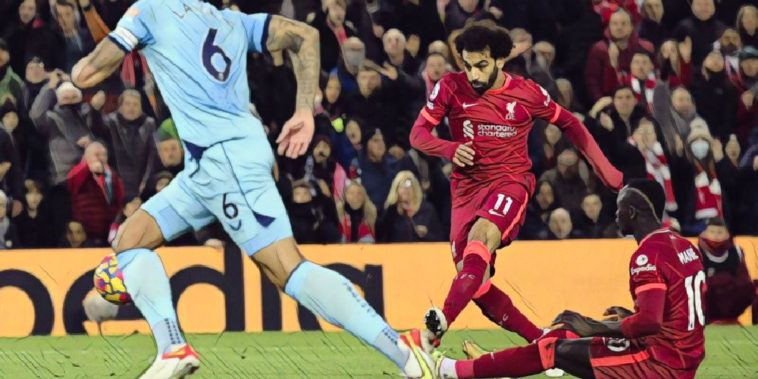 Liverpool moved back to within a point of Manchester City at the top of the Premier League as they came from behind to earn a 3-1 win over Newcastle.

Despite their position within the bottom three, Newcastle would take a surprise lead inside the opening seven minutes, with the lively Allan Saint-Maximin driving the Magpies upfield, before laying the ball off to Ryan Fraser down the left. The Scotsman’s subsequent cross was disappointing, though Thiago Alcantara produced an equally poor clearance that fell invitingly to former Red, Jonjo Shelvey, who whipped a fine finish into the bottom corner to leave Alisson flat-footed and with no chance.

Liverpool missed a couple of hugely presentable chances to draw themselves level through Sadio Mane and Diogo Jota, though the Portuguese would equalise in the 21st minute, turning home at the second time of asking after his initial headed effort had been saved by Martin Dubravka following a cross from the right.

Having opened the scoring against his former side, Jonjo Shelvey gave his old employers an early Christmas gift as a slack ball in the middle of the park was seized upon by Sadio Mane. The Senegalese burst into the box, and while his effort was saved by the Newcastle ’keeper, Mohamed Salah made no mistake as he thrashed home the rebound.

The second half was a much more even affair, with Liverpool not quite at the level they produced in the first period, though would seal all three points three minutes from time as Trent Alexander-Arnold received the ball from Roberto Firmino 30 yards from goal, took a touch to set himself before unleashing an absolutely unstoppable thunderbolt beyond Dubravka.

Reflecting on the game afterwards, Liverpool boss Jurgen Klopp said Eddie Howe’s side ‘made life hard’, though was delighted to see his side claim all three points at this hectic time of year.

“We used in preparations more Bournemouth than Newcastle for analysis,” he told BT Sport. “We won 2-1 last time Eddie Howe was here with Bournemouth after they scored another goal. We expected similar things. They made life hard for us.

“Being 1-0 down changed the mood a bit. We were rushing in moments. We scored really good goals. I’m really pleased in this period of the year when you just have to get through games.

“I said it was the best long ball he [Trent Alexander-Arnold] played today. It was a stunner, unbelievable. His shooting technique is different level.

“In games like this the main thing is staying positive and offensive-minded. Take a chance.”

Liverpool’s equaliser was tinged with controversy as two Newcastle players were down on the floor apparently injured, though the German channelled his inner Arsene Wenger by saying he hadn’t seen the incident on a replay: “I didn’t see it back. I heard it plenty of times. [Eddie Howe] is not happy about it. I didn’t see it back. Quite frequently players go down in the box when they lose a challenge. The assistant on my side told me all good.”

Mohamed Salah’s goal was the 15th consecutive league game in which he has scored or assisted, equalling Jamie Vardy’s record: “That’s quite amazing that. His assists are as important [as the goals]. Today was right to take him off a bit earlier. We play in three days again.”

Manchester United, Spurs and Leicester have all seen significant outbreaks of Covid-19 within their squads to see their games called off this week, while Liverpool were without Virgil van Dijk, Fabinho and Curtis Jones for today’s game.

Klopp has been a vocal advocate of players and fans receiving the vaccine in recent months, and with cases rapidly on the rise in the UK, there have been suggestions that there could be a temporary suspension of the Premier League action to allow for a reset, and the Reds boss was concerned as to what will happen in weeks to come.

“It’s a really tricky situation. Nobody knows exactly how we’ll be tomorrow,” he said.

“We will go to the training centre untl people tell us otherwise. I’ve never had three players on matchday [have to pull out]. The most important thing is because the boys are vaccinated they will not feel it really. That’s good. We have to wait for them.

“If we should stop the league, I have no real answer for it. If you stop it for two weeks and we come back, I really don’t know what to do.

“I saw the Everton line-up today, I don’t know half of the players.

“We have three players out because of Covid. If we have another three or four out, we play Shrewsbury in midweek. In League One and Two, the players are not really vaccinated. Then we play on the 26th and the 28th and you have 13 players available, that’s not possible. There are plenty of questions we need to find answers for but I don’t have the solution.”