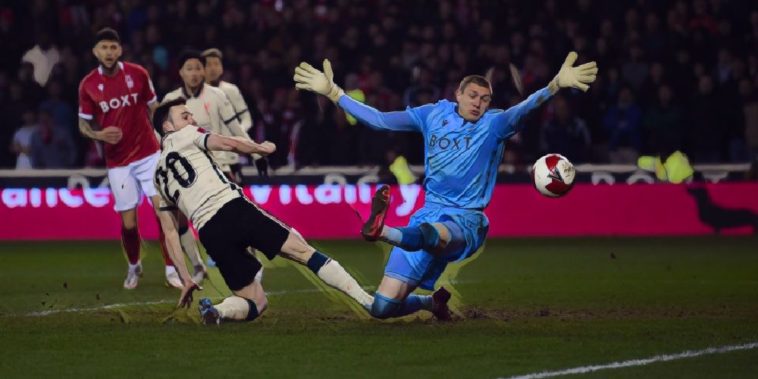 Liverpool’s pursuit of a historic quadruple continued as they ground out a 1-0 win against Nottingham Forest at the City ground this evening.

It was a game that provoked memories of the pair’s rivalry in the 70’s and 80’s, the two sides having regularly challenged for the biggest honours in English and European football.

It was an energetic start to the game from both sides, with Nottingham Forest clearly not afraid of their Premier League opponents having already despatched of Arsenal and Leicester in previous rounds.

Liverpool were unsurprisingly the dominant side, though found tough work of it to break down their hard-working hosts.

It took until the 78th minute for Jurgen Klopp’s side to make a breakthrough as Kostas Tsimikas put in a delicious ball from the left that found the darting run of Diogo Jota, who once again showcased his goalscoring instincts as he touched the ball home at the back post.

Forest had a couple of presentable chances to bag a late leveller, as well as seeing a penalty shout ultimately waved away, though they were unable to find the back of the net to take the game to extra time.

Speaking after the game, Jurgen Klopp said was full of praise for Nottingham Forest and their manager – and former Liverpool academy manager – Steve Cooper.

“That was a proper cup match,” the German told ITV. “Massive compliment for Steve Cooper and his team.

“We should have played better but they made it really difficult. They had moments but then we went 1-0 up. We came though and I’m really happy.”

Asked about Diogo Jota’s winner, Klopp added: “It was a difficult one to finish off. He is a proper striker. Absolutely great.”

The victory books Liverpool a Wembley date against Manchester City in the semi-finals next month, with either Chelsea or Crystal Palace awaiting the winner.