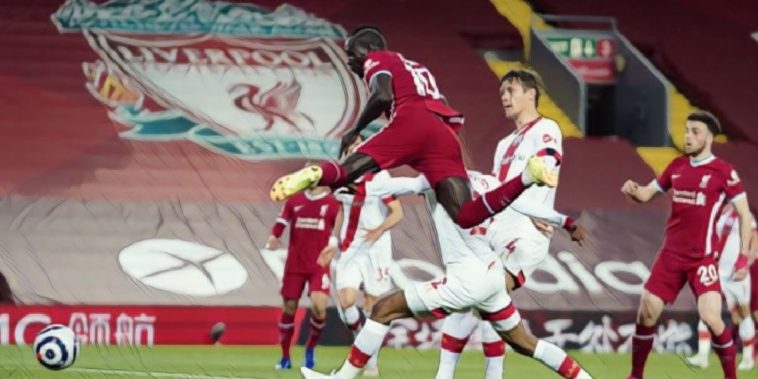 Liverpool maintained their hope of qualifying for the Champions League with a 2-0 win over Southampton.

In truth, it wasn’t the most exciting of games at Anfield, with Southampton going closest to opening the scoring in the 30th minute, Alisson making a big save to deny Che Adams as the Brazilian stayed on his feet to save with his chest.

It would prove to be a vital save as just 46 seconds later, Liverpool would go up the other end to take the lead. Mohamed Salah floated a cross in behind the Southampton defence from the edge of the box, the ball finding the run of Sadio Mane who headed home from close range against his former side – the first time the duo have combined all season in the Premier League.

Southampton kept themselves in the game and created a handful of second-half chances, though lacked the necessary quality in front of goal to truly challenge Alisson who was in good form.

The Reds number one did have a nervy moment in the second half though as he played a lazy ball into midfield that was intercepted by Che Adams, and with the ‘keeper exposed, the former Birmingham City forward couldn’t really get hold of his strike from outside the area.

Liverpool would make sure of the points as the game ticked into added time, Thiago Alcantara taking a lovely touch as he received the ball from Roberto Firmino, advancing to the edge of the box before firing past Fraser Forster into the bottom corner.

The win moves the reigning champions up to sixth in the table, the Merseyside club now just six points behind fourth-placed Leicester with a game in hand following the Foxes surprise defeat to Newcastle on Friday, and speaking afterwards Jurgen Klopp said his side had to put in ‘a big shift’.

Alisson made six saves for Liverpool vs. Southampton, the most he has ever made in a single Premier League game while keeping a clean sheet.

“It was good. It was a tough game. We knew that before. We had to work hard,” he told Sky Sports. “We did that and scored a really nice first goal. They had their moments in counter-attacking situations but Alisson made a really good save in the first half and kept us in the game.

“In the second half it was another big shift because they go and go and don’t give up. We closed the game. We haven’t had that all the time this season.

“I liked our switches. They were maybe not cheeky but brave and good. We told Rhys Williams he has a good long ball so use that from time to time. We had these moments. Alisson plays the ball to their feet and we think ‘oh, what was that?’ but he makes a good save and they didn’t score in that moment so, all good!

“I thought we controlled it better tonight. It was hard for us and for Southampton as well. It’s all about set-pieces and who can do jobs as they are much taller than us. There were a lot of things. We won the game so that’s all that counts.”

Liverpool’s next outing at Anfield next week will see the return of fans as the UK continues on its roadmap out of lockdown, with Klopp unable to find the right words as to why he can’t wait to have them back.

“My English is not good enough. I cannot express it, really. It’s so difficult in these moments without them. I always understand football as we do it for the people. It’s why I wanted to be a professional footballer so people could see it. Yes, we have one home game and we play at Burnley with supporters too which will be tricky but I really hope next season we have fans back in the stadiums again.”

Next up for Klopp’s side is their rescheduled game in hand against Manchester United on Thursday, the Red Devils set to play twice before that meeting, a situation Klopp described as ‘crazy’.

“We play on Thursday [against] Manchester United. It’s not good for them to play lots, it’s crazy, I really don’t understand that.

“All the teams [we have to play] have targets. We will have pressure for as long as we win as that means we have something to fight for. If not, we don’t.”

Rating every signing Liverpool made from Southampton since 2014