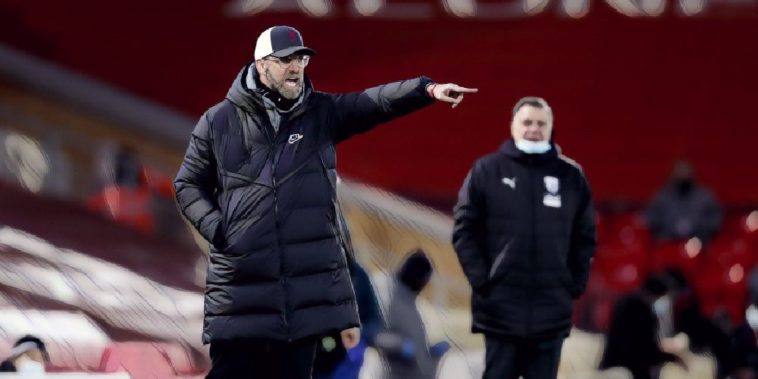 As you would expect, the game instantly settled into a pattern of attack v defence, with Sam Allardyce’s new side trying to stay compact at the back, with Liverpool’s midfield being afforded plenty of time and space on the ball.

However, it only took 12 minutes for the champions to break down the Baggies tightly packed defence, defender Joel Matip fizzing the ball in towards the chest of Sadio Mane, the Senegal international expertly controlling the ball, turning as he did so, before firing past Sam Johnstone.

Liverpool continued to dominate and created a whole host of chances in the first half, though the ball just wouldn’t quite drop for Jurgen Klopp’s side.

However, having earned a valiant point against Man City before Christmas, West Brom did show a bit more adventure after the break as they tried to repeat the trick against the league leaders, and were denied an equaliser as Karlan Grant failed to beat Alisson in a one-on-one after beating youngster Rhys Williams for pace.

With just eight minutes to go though, Liverpool were punished for their first-half missed chances, and after cheaply giving away a corner, Semi Ajayi rose highest to head in off the post.

1 – This is the first time since December 2016 that Liverpool have dropped points from a winning position at Anfield against a side starting the day in the relegation zone (2-2 West Ham). Shocking. pic.twitter.com/BukYMJMu31

Sam Johnstone made a number of wonderful saves at the death in that aforementioned draw against Man City, and the former Man Utd man made another fine save to deny Roberto Firmino as the game ticked into the 90th minute, with West Brom going on to hang on for a point.

Speaking afterwards, Reds boss Jurgen Klopp accepted West Brom ‘deserved’ a point from the game, saying his side paid the price for failing to put the game beyond doubt in the first half, with just one of their 10 first-half attempts being on target, while his side’s only other shot on target would force Johnstone’s late save.

“I don’t think anyone can expect a team plays like West Brom in the first half, like a 6-4 [formation] or whatever it was,” he told Sky Sports. “I thought we did OK. Second half we didn’t do the same again, they had like three counter-attacks, too many corners. It is our fault and that is why it is only one point instead of three.

“It is an incredible challenge when you constantly face 10 men. To be fair West Brom did their job inside 90 minutes. West Brom deserved the point tonight because we didn’t finish the game. It is difficult to create. In the end everyone knows and feels we should have and could have done better tonight.

“They played different against Villa, today what was clear it would be defensive and over set pieces. When it clicks in the game you cannot plan clicking you just have to work for it.

“We played around, crossed the ball and instead of moving we didn’t switch. It is not a game we will talk about in 20 years but it is a game we have to play and we didn’t play as we could.”

The point sees Liverpool open up a three-point lead over second-placed Everton, with an away trip to face Newcastle up next on December 30th.