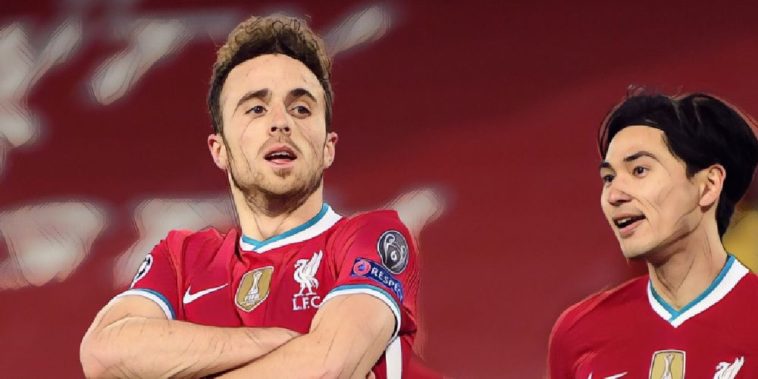 Goals from Diogo Jota and Mohamed Salah saw Liverpool maintain their perfect start to their Champions League campaign, beating FC Midtjylland 2-0 at Anfield, although they did so in less than convincing fashion.

Midtjylland – playing just their second ever Champions League group game – looked threatening on a number of occasions in the first half, while Jurgen Klopp’s rotated side looked somewhat off-colour and failed to register a single shot on target before the break.

The Reds came into the game on the back of the well-publicised absence of Virgil van Dijk through injury, though their troubles at the back worsened after 30 minutes as Fabinho – playing as a makeshift defender in the Dutchman‘s absence – was also forced to withdraw with what looked like a hamstring injury.

10 minutes after the break and Liverpool finally produced a moment of quality to break the Danish side with a tidy move. Trent Alexander-Arnold played a give-and-go with Xherdan Shaqiri on the edge of the area, the England international receiving the ball back on the corner of the six-yard box before squaring it to summer signing Diogo Jota who poked home from close range – the Portuguese scoring Liverpool’s 10,000th goal.

10,000 – Diogo Jota's goal was Liverpool’s 10,000th scored in their history in all competitions, coming 128 years after their first, netted by Jock Smith in September 1892 in the Lancashire League. Historic. pic.twitter.com/dWI5adBY77

With five subs at his disposal in the Champions League, Jurgen Klopp threw on on his big guns as he looked to make sure of all three points, with Midtjylland creating a number of chances in the final 20 minutes.

With two minutes of normal time remaining, substitute Roberto Firmino wasted a chance to double Liverpool’s advantage as he blazed over from inside the box. However, two minutes later, fellow sub, Mohamed Salah, was clipped in the box by Paulinho, the Egyptian stepping up to smash the resulting penalty home to secure the Reds’ second win from their two opening Group D games.

Speaking afterwards, Jurgen Klopp admitted it wasn’t the greatest of nights for his side.

⚽️ Mohamed Salah is the 2nd player to score 20 #UCL goals for Liverpool – is now one behind Steven Gerrard's club best total pic.twitter.com/sWHcaK0ELT

“It was a tough night. It’s a bit like in a marriage, there are good and bad times,” he told BT Sport.

“It’s not a bad time but it’s a tricky time. 100% we have to stick together and fight harder and that’s what the boys did tonight.

“Losing Fabinho in the first half, Rhys Williams he’s only 19-years old and I think he’s played more Champions League games than Premier League games – that’s rare. We’re doing really well but its a shock for a team because now we have to sort that injury.

“We had to make the change at half time with Jordan Henderson – he said I’m fine but in these moments you have to be responsible and the plan before the game was to give him around 45 minutes so he would be okay for West Ham. It was a hard game to play. But winning 2-0 is completely fine so that’s it – let’s carry on.”

Speaking about the injury to Fabinho, Klopp added: “Exactly the last thing we needed. I don’t know, he felt his hamstring so that’s not good. He didn’t feel it that much he said he could’ve played on but not sprinting so that doesn’t help. We will see, we will have to do a scan and see but clearly it’s not good.”

Next up for Liverpool is a potentially tricky home game against an in-form West Ham, David Moyes’ side having taken points off Spurs and Man City in their last two outings.