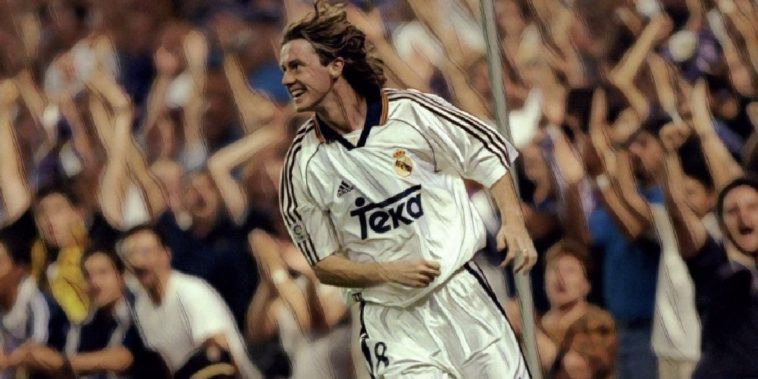 Liverpool host Real Madrid this evening in the second leg of their Champions League quarter-final tie, the Reds needing another huge night on Merseyside to progress to the last four.

The Spanish champions arrive at Anfield in possession of a 3-1 first leg advantage and head into the clash as favourites to book a semi-final showdown with Chelsea.

Ahead of this evening’s clash, we look look at five of the best players to ply their trade at both Anfield and the Bernabeu.

While younger readers may only know of Steve McManaman for his dulcet tones on BT Sports’ football coverage, he was actually a fine player back in his day.

He came through the club’s academy ranks before making his debut in the early nineties, becoming one of the Premier League’s best wide talents and making 364 appearances in all competitions,  scoring 66 goals.

He eventually made the move to Spain under a bit of a cloud after signing a pre-contract agreement with Real in 1999, moving to the Spanish capital on a free transfer.

In his four years at the Bernabeu, he made 152 appearances, winning two La Liga titles and two Champions League trophies, making him one British football’s most successful exports.

Fernando Morientes was a valuable member of a successful Real Madrid side across the turn of the millennium, scoring  a century of goals for Los Blancos and winning two league titles and three Champions League trophies.

After spending time on loan with Monaco he signed for Liverpool during the January transfer window in 2005, having been pushed down the pecking order during the Galactico era at Real Madrid, including by another man on this list, Michael Owen.

He struggled to recapture his former form during a disappointing spell in the Premier League and scored a total of just 12 goals for the Reds in a season-and-a-half, before returning to Spain with Valencia.

Nicolas Anelka became Real Madrid’s record signing when arriving from Arsenal, the forward having made a stunning impact in the Premier League as a teenager.

His spell in the Spanish capital proved an unhappy one however, struggling to settle and coming under intense scrutiny and criticism from the Madrid media.

He signed for former side Paris Saint-Germain following a fall-out with coach Vicente del Bosque, before making a return to the Premier League during a loan spell at Liverpool.

Despite impressing during a brief spell on Merseyside the Reds opted not to sign Anelka on a permanent basis, his latter career including successful spells at Manchester City, Bolton and Chelsea.

Michael Owen became one of Real Madrid’s Galactico signings during the 2000s, becoming the fourth Ballon d’Or winner to sign for the Spanish giants in just five seasons after arriving from Liverpool.

Owen burst onto the scene as a youngster and established himself as one of the most prolific goalscorers in Europe, winning back-to-back Premier League Golden Boots as a teenager and scoring 158 goals in 297 appearances for the Reds.

He formed part of the side that won an FA Cup, League Cup and UEFA Cup treble in 2000/01, winning the Ballon d’Or later that year before attracting the interest of Real Madrid in 2004.

Owen spent just one year in the Spanish capital, before returning to England with Newcastle after struggling for regular minutes with the majority of his 45 appearances coming from the bench.

Despite his limited starting opportunities, he still managed 13 goals and finished with the best goals/minutes ratio in the whole of La Liga that season.

Starting his career at Real Sociedad, Alonso moved to Anfield in 2004 to join Rafa Benitez’s Spanish revolution. It would be a move that would start his path to being one of the best central midfielders of his generation.

The midfielder quickly became an integral part of the Liverpool midfield and won the Champions League during his debut season, scoring as the Reds beat AC Milan in one of the greatest finals of all time in Istanbul.

He won the FA Cup the following season and played an important role in Liverpool reaching a second Champions League final in 2007, though the latter showpiece ended in defeat as AC Milan avenged their defeat two years earlier.

Alonso made the move to Real Madrid in 2009, where he starred at the heart of midfield, making 236 appearances for Los Blancos and winning a second Champions League trophy as the club secured La Decima in 2013/14.

The midfielder spent five seasons in the Spanish capital before leaving to join another giant of European football, Bayern Munich.