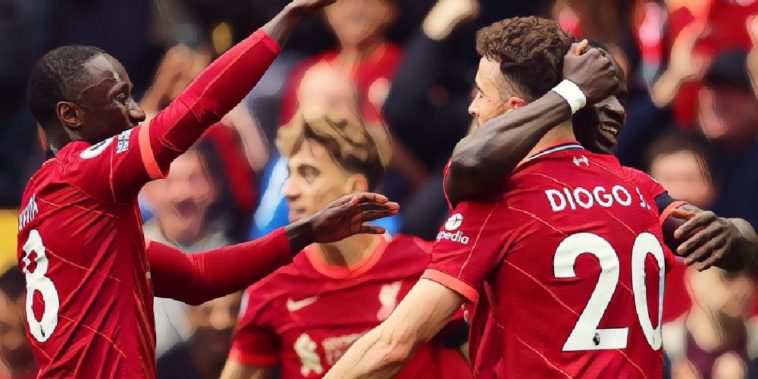 Goals from Diogo Jota and Sadio Mane made it two wins from two for Liverpool, as they overcame a spirited Burnley side to clinch a 2-0 victory at Anfield.

Jurgen Klopp made two changes from the side that beat Norwich last weekend, handing a surprise start to teenage talent Harvey Elliott in midfield, while also welcoming back Jordan Henderson to the starting XI, with Andy Robertson returning to the bench after his ankle injury.

In their first game back with a capacity crowd at home since March 2020, the Reds rewarded their returning support with an opener after just 18 minutes, two of last year’s summer signings combining as Kostas Tsimikas’ wicked delivery found Jota who got in front of his man to nod home superbly.

The hosts appeared to have extended their lead moments later as Mo Salah curled into the back of the net following an exquisite through ball from Elliott, only for the Egyptian to see his effort chalked off for offside following a VAR review.

The away side had been a threat in the opening exchanges and continued in the same vein after the break, Ashley Barnes finding the back of the net just moments after the interval, albeit with his celebrations cut short by another correct offside decision.

Following that brief scare, the home side began to increase their dominance and perhaps should’ve extended their lead, Mane spurning a handful of opportunities to get himself on the scoresheet.

Most shots in a Premier League game by Liverpool over the last three seasons:

At least they converted two of them this afternoon. 😅 pic.twitter.com/jHj1aXVKFl

With just 20 minutes remaining, however, the Senegal international did eventually find the target, capping off a fine team goal with an excellent finish on the half-volley, following a delightful dink from Trent Alexander-Arnold.

That proved to be the game’s final goal despite a late flurry from Sean Dyche’s men, ensuring all three points would go to the home side after what was an entertaining encounter on Merseyside.

While Klopp was full of praise for his side, he took the opportunity to take aim at the new Premier League directive to let the game flow, describing it as a potentially ‘dangerous’ move for player safety.

“Burnley was never a game where you’re flying and you can outplay them, at least not for us,” Klopp told BT Sport. “We always have to be ready for a proper fight. We were today in a really difficult game.

48 – Virgil van Dijk has now made 48 Premier League appearances for Liverpool at Anfield, losing none of those games (W43 D5); only Lee Sharpe played more home games for one club in the competition without losing any of them (59 with Manchester United). Charm. #LIVBUR pic.twitter.com/YwR6UHesV8

“You saw these challenges with Barnes and Wood with Virgil [Van Dijk] and Joel [Matip]. I’m not 100 per cent sure if we’re going in the right kind of direction with these kind of decisions. It feels like we’re going 10 or 15 years backwards.

“It’s just too dangerous. You cannot really judge the situations. How you get up in the air is fine but when you come down and they stand still into the defender, it’s just hard. The rules are like they are.

“You cannot defend these situations or avoid them. It makes the game really tricky. We scored two goals. A wonderful third one which was offside but I loved the pass from Harvey [Elliott] to Mo [Salah] anyway. Sadio could have scored a few more. In the end it’s 2-0, all fine.

“It all started 20 years ago when we changed the rules to protect the players. I don’t think it’s right but I cannot decide these kind of things.

“I heard we want to let the game flow but it’s always like this. I stick to it. The second goal from Brentford, they did brilliantly, but it must be a foul. You cannot clip the arm of the goalie and say, ‘That’s football.’ These kind of things…

“It’s all fine. We need to get used to it. But we have to think about it maybe a second or third time. There’s one message now, let the game flow. Nobody knows exactly what that means. I’m not sure.

“I like decisions in favour of the offensive teams, like offsides now, that’s fine, but we have to stick to protecting the players. We cannot deny that completely and say ‘That’s a challenge, I love watching that.’ Watch wrestling if you like these kind of things!”

"Now we've got the fans back it's a different game and hopefully, we can keep our fortress"

The former Borussia Dortmund boss was asked about Jota’s intelligent movement for the opener – the Portugal international having brilliantly found a yard of space between James Tarkowski and Ben Mee.

“Without the cross of Kostas, this goal wouldn’t have happened obviously,” he said. “It was great movement and a great cross. It’s a nice goal and that helps massively.

“We played a lot of moments a brilliant game but we didn’t score, it’s these kind of things you forgot after a game.

“In the other moments we had to fight incredibly hard. Burnley had a really good start in their way. But we won it and nobody got injured, all good.”

Liverpool are next in action at home to Chelsea on Saturday evening, while Burnley host Leeds United at Turf Moor on Sunday.