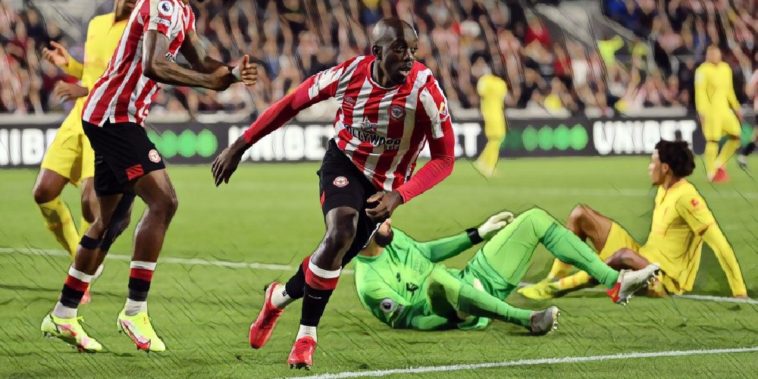 Brentford produced yet another impressive display to twice come from behind to earn a point against Liverpool in a hugely entertaining encounter in West London.

Liverpool came into the game having seen both Chelsea and Manchester United slip to 1-0 defeats to Man City and Aston Villa respectively earlier in the day, and they almost took the lead in just the seventh minute. The Reds won possession on the halfway line before Diogo Jota released an inch-perfect through-ball into the feet of Mohamed Salah, the Egyptian racing forward and poking the ball between the legs of Brentford ‘keeper David Raya, only to see Kristoffer Ajer get back and impressively clear it off the line.

Brentford have impressed with their energetic brand of football since their promotion, and would take the game to the early league leaders throughout, and saw an effort of their own cleared off the line by Joel Matip after Bryan Mbeumo had lifted it over Alisson.

After the early frantic start, the game started to settle down, though in the 26th minute, the Bees would stun the visitors to take the lead, and they did so with an excellently worked set-piece routine. Having lined up to swing a ball into the box, Brentford went short to Christian Norgaard who clipped a ball into the channel to Sergi Canos. The former Liverpool youngster got himself to the byline before firing the ball across the box, Ivan Toney’s smart flick finding its way through to centre-back Ethan Pinnock at the back post who tucked home.

The hosts’ lead would, however, last just four minutes, Salah finding Jordan Henderson in space down the right before the Reds skipper floated a ball across the box to the awaiting Jota who headed his side level from close range.

The Merseyside outfit twice went close before the break as Curtis Jones saw a deflected effort come back off the post, before David Raya produced a remarkable save to keep out Jota’s close-range follow-up effort.

Liverpool would however take the lead just five minutes after the restart, and it would come through an all familiar face. Fabinho lifted a wonderful ball forward from midfield, a ball that dropped perfectly into the feet of the Mohamed Salah who stroked past the Spanish ‘keeper first time, and while it was initially ruled out for offside, VAR overruled the decision to confirm the 29-year-old’s 100th Premier League goal for the club, a milestone reached in just 151 outings.

Brentford rallied once more and would only be behind for nine minutes as they outnumbered Liverpool at the back post following a cross from the right. Defender Pontus Jansson crashed an effort off the bar before Vitaly Janelt headed over the line at the second attempt despite Trent Alexander-Arnold’s desperate attempt to keep it out.

A standout in an outstanding game. 🐝 pic.twitter.com/f7g2vgmJpW

Four minutes later and Liverpool retook the lead in thunderous style, Curtis Jones cutting in from the left before releasing an absolute piledriver into the back of the net from 20 yards, the youngster’s effort flying past Raya following a deflection from the attempted block by Ajer.

Salah and Mane had presentable opportunities to extend the lead, and they would be made to pay for those misses as Thomas Frank’s side levelled once more, and again it came from a cross from their right. Shandon Baptiste curled a ball in towards Yoane Wissa at the back post, and while his first effort was blocked, the Congolese followed up to net at the second attempt.

Brentford forward Ivan Toney then thought he had netted what would have been a winner as he fired low past Alisson, only for the linesman’s flag to deny the club a famous win.

The win moves Liverpool a point clear at the top of the Premier League, though Jurgen Klopp said he wasn’t exactly able to enjoy the pulsating encounter.

“[I’m] not sure enjoy is the right word. It was a wild ride,” he told Sky Sports. “They deserved their three goals for the way they played. We obviously couldn’t deal with the long balls today but we should have scored more goals.

“They deserved it. I don’t think you can control them much better, we created a lot of clear-cut chances but couldn’t deal with them defensively. These things happen. We should have scored more. If we win 3-2 or 4-3 we still have these struggles defensively. Toney and Mbuemo did really well. Brentford deserved a point.

Only three sides have scored 3+ goals against Liverpool in a Premier League game in 2021:

The Bees have not given up. 🐝 pic.twitter.com/jtXa79x5V9

“I have no problem with accepting when you play this kind of football. That’s football. You have to create things to deserve to win. They deserved a point as well because they put up a proper fight. I respect that a lot. In the end there were situations we should do better – and then it could be a completely different game. Their goalie should have number 10 on his shirt with the balls that he played.”

Asked about Salah’s achievement of scoring his 100th league goal for the club, Klopp said: “I’m sure Mo sees it the same way, he would love to have 101 today. There were many good moments football-wise against a tricky set-up but we could not defend when the goalie chips the balls forward.”

Next up for Liverpool is a trip to face Porto in the Champions League before host Man City next weekend.

See also – FIFA 22: Five of the best teams to try on Career Mode