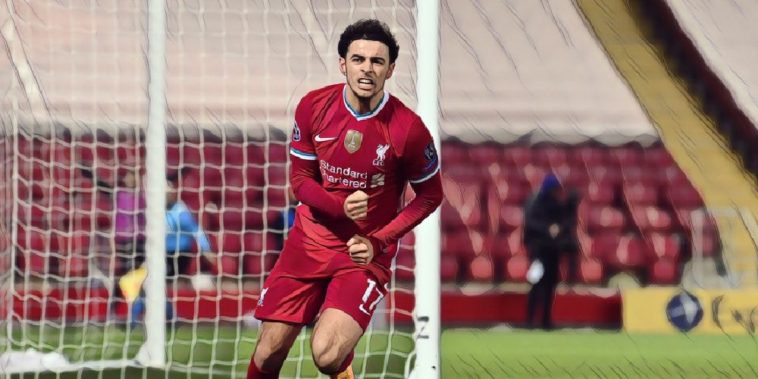 Liverpool booked their place in the knockout stages of the Champions League with an entertaining 1-0 win over Ajax on a chilly night at Anfield.

Liverpool came into the game with well-publicised injury issues, and Jurgen Klopp was handed another in the build-up with influential ‘keeper Alisson Becker being ruled out with a minor hamstring injury, the Brazilian being replaced by young Irishman Caoimhin Kelleher ahead of regular number two, Adrian.

The Reds had slipped to a shock 2-0 loss in their last Champions League outing against Atalanta, and with all still to play for in Group D, it was an open and generally entertaining game between two attack-minded sides who are equally comfortable in possession of the ball.

Liverpool started brightly, with academy graduate Curtis Jones being denied by both ‘keeper and the post in the opening six minutes, before the visitors began to grow in confidence on the ball, though few clear-cut chances were created for either side in the remainder of the first half.

The second half began in an equally open fashion, with both side’s creating chances in the opening stages, with Kelleher being forced into a save by Ajax right-back Noussair Mazraoui, only for David Neres’ follow up to crash wide off the post.

We're into the last 16, Reds 💪🔴 pic.twitter.com/VrkUPm3owR

Minutes later though and Liverpool took the lead, goalkeeper Andre Onana woefully misjudging the flight of Neco Williams cross, with Curtis Jones getting his reward for following in at the back post to stroke home unopposed.

It continued to be an entertaining affair, and Champions League debutant Kelleher pulled off a brilliant late save to keep his side ahead from veteran striker Klass Jan Huntelaar.

Speaking afterwards, Jurgen Klopp was full of praise for youngsters Jones, Kelleher and Williams on a night he described as one of the ‘biggest’ during his time at Anfield.

“Honestly since I was at Liverpool that feels like one of the biggest Champions League nights. Without supporters in, it was the most important, most difficult, most exceptional,” he told BT Sport.

Capped off with his first #UCL goal. pic.twitter.com/XtLlVQ5p1s

“With the circumstances, there hasn’t been much to smile about, it’s been tricky, and the boys throw themselves into the game. Robbo has a proper knock on the ankle and pushes himself through, Hendo with a sore back, Gini – I have no words for him. Curtis Jones, what a game, It’s amazing, I’m really proud.

“Curtis is a really good kid, a good player and I am happy to have him around. Sometimes with injuries there is always an opportunity and he has taken it.

“I really think Adrian has done a fantastic job for us, he kept a lot of clean sheets, played everywhere. But now we needed the natural football playing ability of Caoimhin Kelleher. He is a good shot stopper as well. We made that decision but you never know how they are going to cope. I am really happy with how calm he was and how good he was.

“We had a long talk with Neco Williams this week, we think he has more in the locker than he has shown so far. The season started after a difficult summer with lockdown, a short pre-season and then Trent Alexander-Arnold is out.

“Neco was not in the best shape but he’s on the big stage – tonight he showed glimpses. He can be so much better still.”

Next up for Liverpool is a home game against Wolves at Anfield, a game with 2,000 fans set to be in attendance following the loosening of restrictions in parts of England.