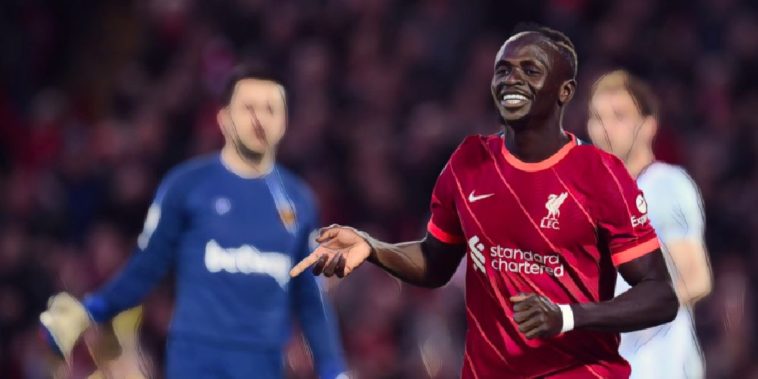 Sadio Mane’s first half strike earned Liverpool a hard-fought 1-0 win over West Ham to close the gap at the top of the table back to three points.

Liverpool had the better of the opening exchanges and took the lead just before the half-hour mark. A scuffed shot by Trent Alexander-Arnold from the edge of the area ultimately found the instinctive run of Sadio Mane, who got in behind Craig Dawson before touching the ball past Lukasz Fabianski from close range.

West Ham kept it tight at the back and offered plenty of threat going forward, with both sides seeing an effort cleared off the line before the break.

The pre-match headlines were dominated by the news of Declan Rice’s absence from the Hammers lineup, the influential midfielder ruled out through illness, and their hopes were dealt a further blow as Jarrod Bowen was forced off early in the second half.

Despite that though, West Ham created the better opportunities in the second half, with Liverpool not quite showing the same intensity after the break, and Manuel Lanzini spurned a wonderful opportunity to equalise midway through the second period. The Argentine got in behind the Reds defence to meet a cross from the right, but having taken a composed touch to control the ball, his finish was all but composed as he sent his effort over the bar.

Michail Antonio also saw an effort blocked by Naby Keita as the East London outfit looked to draw level, the Hammers looking a constant threat on the break. Ultimately though, they were left ruing the quality of their end product as Liverpool claimed all three points to move three points behind Manchester City.

Speaking after the game, Klopp was pleased with his side’s ‘passion’ to defend amid their lack of ‘organisation’.

“I don’t know if we will remember this game as one of the important ones [in the title race],” he told Sky Sports.

“We know about the different things West Ham are good at. In the first half we denied them these situations but in the second half the game was more open.

“They knew they had to be direct and around the second ball we were not as good, but you have to get over the line and I was pleased with that.

“If you are not well organised you have to defend with passion and that’s what we did.

“We were lucky in these moments but you cannot win the amount of games we have recently without stretching your luck from time to time.

“So I am absolutely happy with the result. I know we can do much better but we brought this one over the line against a strong opponent. It’s no coincidence that they are so high in the table and pushing for Europe.

“I saw a lot of top individual performance, Sadio Mane was one of them. He is really difficult to defend against, but in the end we did not make as much of the situations as we could have.”

Liverpool will be hoping for a favour from their bitter rivals Manchester United in tomorrow’s Manchester derby, though the German said his side simply have to win their own games as they chase a second title in three years.

“Of course we are interested in it, but we have no influence on it,” he said of Sunday’s game. “We have to win the games we play. Those we do not play in we have no hand in it. Why we don’t think about it or talk about it, we just try to win our games.”