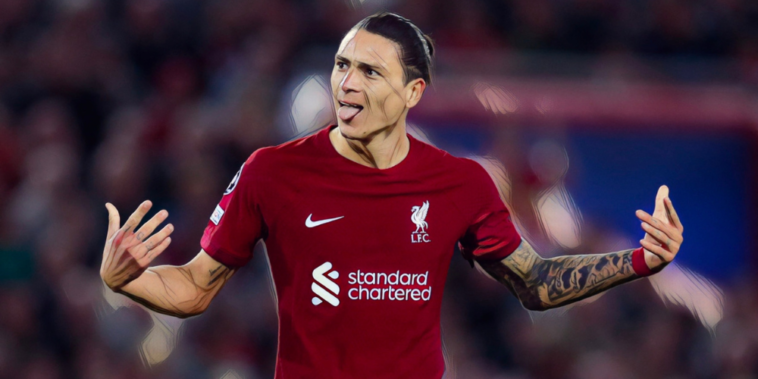 Nunez has had a slow start to his career with the club since arriving from Benfica during the summer, with expectations high following a deal which could reach a club-record £85m.

The Uruguay international scored twice in his first two appearances for the Reds, but a red card against Crystal Palace led to a three-match ban and he has yet to return to the side on a regular basis.

Klopp included the 23-year-old from the start during the 2-0 win over Rangers in midweek, as he switched the Reds formation to include both Nunez and Diogo Jota in central roles. The German admits he was pleased with Nunez’s performance despite a failure to get on the scoresheet and believes Liverpool should be optimistic about what is to come from the forward.

“It was his movement and down to the movement of the boys around him. One of the things he showed so far in all games, is that frequently he gets himself into good finishing positions,” Klopp told his pre-match press conference ahead of Liverpool’s trip to Arsenal.

“It’s why we should be optimistic about what’s coming from him in the future. It is more important that we become unpredictable again. It is not the only system we can play. We don’t want to make it more complicated than it needs to be but we need to find the best one for our next opponent and for us.”

Klopp opened up on his side’s difficult start to the season, with Liverpool having won just two of their opening seven Premier League games. The Reds are ninth in the table and 11 points behind leaders Arsenal ahead of their clash with the table-topping Gunners on Sunday.

“When you spot a problem, we want a solution instantly. We are still a work in progress to find a way out. So you cannot say now we’re back, we need consistency. For that we need to defend the rubbish out of everyone.

“I am not interested in this short-term. We have to be good until we are outstanding.

“From here, we go and go and go and improve. Arsenal away, Rangers away – a different game to Anfield – and Man City…what can I say ‘yes, we are through [the bad patch] and I can see the light. I am optimistic and positive. These players are outstanding still but the body language has to be good.”