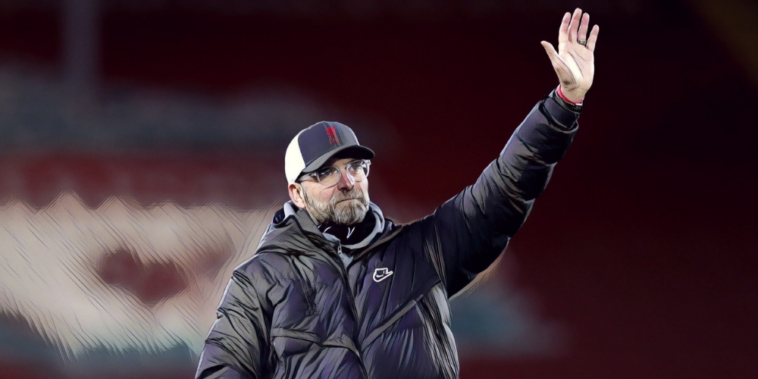 Jurgen Klopp has revealed his desire for Liverpool to go as deep into the competition as possible after seeing his side secure a 4-0 aggregate win over RB Leipzig in the Champions League’s last 16.

After a 2-0 first-leg victory against the Bundesliga side, the Reds produced a commanding display on Wednesday night, second-half goals from Mohamed Salah and Sadio Mane securing victory and their passage into the quarter-finals, at the expense of Julien Naglesmann’s entertaining young side.

In truth, their European voyage has become a welcome distraction for Klopp and co following their dismal league campaign, the champions currently looking set to to miss out on a top four spot despite having romped to the title last season.

Their loss at the hands of Fulham at Anfield on Sunday made it a club-record sixth successive home league defeat, while they’ve now lost six of their last seven Premier League games, their solitary win coming against bottom side Sheffield United at Bramall Lane.

While their league season looks all but over, the Reds still have hopes of enjoying a long run in Europe, with Klopp admitting that while his side may not be in the best shape to win the competition, Liverpool ‘want to go as far as possible’ in the Champions League’s latter stages.

“It is kind of, but as well not because the only reason you play in this competition is because you want to win it,” he said at his post match press conference.

“I am not silly, we know so far this is not a season which it will look like we will win the Champions League in the end, but that doesn’t mean we don’t want to go as far as possible and then we will see what is possible for us.

“Now we have to wait for the draw; it will be extremely tough games whoever we get, but we don’t really think that far, we don’t have to. We think from tomorrow about Wolves and then I don’t know when the draw is, to be honest. We have to wait a little bit, no problem, then we will know, we will prepare for that and then we will see how far we go.”

The German was also asked if his side might become dangerous opponents given that they could put more emphasis on the Champions League, amid their current domestic struggles.