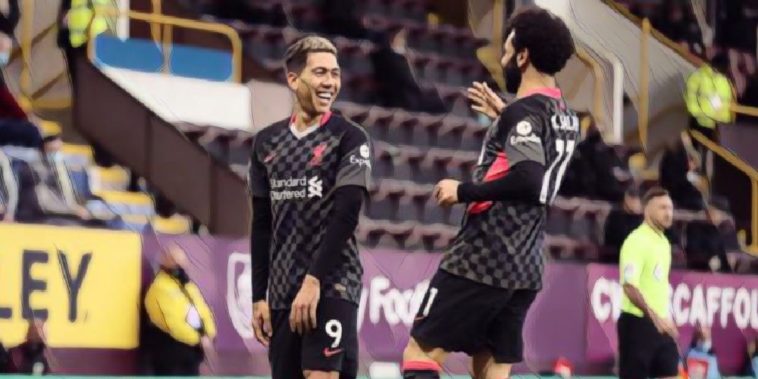 Liverpool’s Champions League ambitions received a huge boost on Wednesday evening, as they returned to the top-four for the first time since February following a crucial 3-0 win away at Burnley.

After Leicester City’s defeat to Chelsea on Tuesday night, the door had been left open for the Reds to bolster their own top-four hopes, with just three points separating themselves and Leicester in fourth, heading into the game at Turf Moor.

In desperate need of the win, Jurgen Klopp’s side unsurprisingly came flying out the traps and perhaps should have been ahead inside three minutes, Ben Mee first superbly denying Mo Salah, before Sadio Mane somehow failed to turn home after a typically wicked ball in from Trent Alexander-Arnold.

Last season’s runaway champions then saw Roberto Firmino and Thiago Alcantara both squander guilt-edged chances, either side of a golden opportunity for Burnley’s Chris Wood, yet the former Leeds United man blazed his effort wide.

The hosts had begun to enjoy a much-improved spell late in the half, yet it was Liverpool who ultimately made the breakthrough just before half-time, Roberto Firmino firing home after an excellent cut-back from Andy Robertson, although debutant stopper Will Norris perhaps should have done better to keep the strike out.

The Merseyside outfit went on to extend their lead soon after the interval, centre-back Nat Phillips continuing his fairytale rise with his first goal for the club, the 24-year-old meeting Mane’s cross with a powerful header past a helpless Norris.

Although two goals to the good, the visitors looked anything but comfortable against their spirited hosts, Wood posing a constant threat through the middle, while James Tarkowski also saw his header superbly cleared off the line by goalscorer, Phillips
.
Sean Dyche’s men continued to put their hosts under pressure for the remainder of the half, yet their opponents just about managed to hold them at bay, the heavily involved Phillips producing a rock-solid display at the heart of the Liverpool defence.

With substitute Alex Oxlade-Chamberlian sealing the win late on in fine fashion, the Reds now find themselves in fourth heading into the final day, having jumped ahead of FA Cup winners Leicester City.

Is history repeating itself for Leicester?
Can Arsenal leapfrog Everton and Spurs to claim a European spot?

It’s going to be an interesting final day! pic.twitter.com/3naSTYkE1P

Liverpool now need know that they will virtually guarantee a top four finish, though with Leicester only behind on goal difference, Jurgen Klopp was keen to temper excitement ahead of the final round of fixtures.

“It was a semi-final. We had to win the semi-final and we did,” he told Sky Sports.

“Nothing is decided yet but we improved our position and we have the final. That’s what we needed. It’s what we deserve because this was a top performance.

“You can’t give any chance away against Burnley because of the way they play. They wanted to go for our centre-halves but our boys did outstandingly well.

“We knew before the game it would be incredibly tough – they had about 3,500 people not on our side. Atmosphere in football is massive.

“I thought the boys dealt really well with that. They didn’t get distracted – they tried to use it because noise is nice. We played a lot of good football stuff.”

The German was also asked whether the Reds wanted a big win to boost their goal difference, although he simply reiterated that it was a ‘semi-final’ clash that they were solely focused about winning.

“No. We saw it as a semi-final,” he insisted. “You can’t go to Burnley and hope to win 3-0. It’s usually incredibly tight.

“We have to make sure we recover quickly. We have a thin squad in some positions. We have to wrap them in cotton wool. I can’t wait for the 10,00 fans at Anfield. Nothing is decided – Palace are strong.”

Five strikers that will dominate the transfer headlines this summer