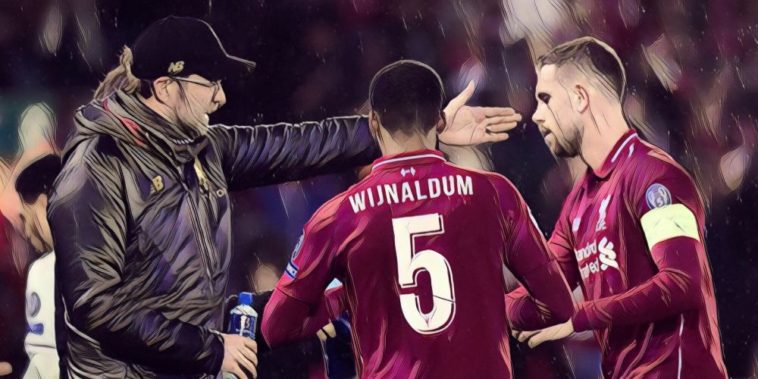 Jurgen Klopp has praised Liverpool’s options in midfield and discussed the differing roles for several of his midfield stars.

The Liverpool boss has often selected captain Jordan Henderson, Fabinho and Georginio Wijnaldum in his first-choice midfield over the opening weeks of the season, though opted to rotate his preferred midfield for the midweek Carabao Cup win against Arsenal, handing starts to the likes of Adam Lallana, Alex Oxlade-Chamberlain and Naby Keita.

Henderson has impressed in recent weeks and has featured prominently in an unfamiliar wider role, with Klopp praising the flexibility of the 29-year-old following his performance in the 2-1 win over Tottenham last weekend.

“He has been very good. I like what he is doing,” the German said at his pre-match press conference.

“Very important for us against Man Utd and Spurs. We adapted a bit to their formations, that’s why he played a bit wider. It’s not a general position [for him]. He has had more freedom than a No.6.

Klopp also reserved praise for Wijnaldum, the Dutchman’s high level of consistency having been recognised with a nomination for this year’s Ballon d’Or.

“No surprise he can play [a few midfield positions]. Playing an advanced position for Holland it’s not a massive difference. He has all the skills to do that, of course.”