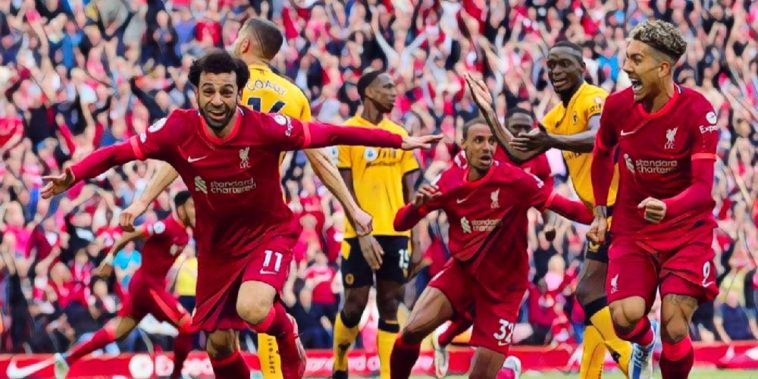 Liverpool once again had to settle for second as Manchester City produced a stunning turnaround to clinch the Premier League title.

Liverpool knew that they had to win in order to have a chance of clinching a second Premier League title in three years, all while hoping for a Manchester City slip up at the Etihad, though it was a disastrous start from the Reds.

A third-minute goal kick picked out the run of Raul Jimenez in behind Ibrahima Kounate, the Mexican squaring the ball across the Liverpool box to find Pedro Neto at the back post who fired past Alisson to silence the Anfield crowd.

Jurgen Klopp’s side quickly started to pile on the pressure as they went in search of a comeback, and in the 24th minute they got themselves level. Kounate played the ball into the feet of Thiago Alcantara before the Spanish magician played a delicious first-time flicked pass to find Sadio Mane, who burst into the box and fired past Jose Sa.

With Manchester City trailing 2-0 at the Etihad, Liverpool were struggling to break down Bruno Lage’s side, to leave them still behind in the ‘As it Stands’ table, before City produced a sensational turnaround to take a 3-2 lead.

However, the Reds kept their end of the bargain as Mohamed Salah netted his 23rd goal of the season, before Andrew Robertson played a one-two with Roberto Firmino to make it 3-1 in the 89th minute.

It wouldn’t be enough however as City held out to claim three points and their fourth title in five years, and speaking afterwards, Jurgen Klopp offered his congratulations to Pep Guardiola’s side.

Liverpool have completed a Premier League season unbeaten at home for the fifth time:

The fourth time under Jürgen Klopp. 😤

“Congratulations to Man City and Pep Guardiola,” he told Sky Sports. “Thank you to Aston Villa and Wolverhampton for making a proper game of it.

“It’s not the result we wanted. It was a bit of a rollercoaster. I don’t know the results exactly but I know they were 1-0 up – where they 2-0 up as well? Of course, at the moment there’s disappointment here as well.

“If it’s 5-0 to City after 10 minutes it’s just a normal game for us. It wasn’t our best game either, but it’s all good. 92 points is absolutely incredible. We wanted it all, but now it’s OK.

“[Finishing second] is the story of my life. I’m still record holder for not getting promoted in Germany with the highest points tally. You need to get more points than any other teams, but we didn’t do that.

“You can’t do more than give your absolute best and that’s what the boys did again. We chased the best team in the world to the wire, that’s absolutely special. We’ll build a team again and go again.”

Having played an influential part in Liverpool’s equaliser, Thiago was forced to be replaced at half time due to injury, and Klopp had bad news for Reds fans ahead of next weekend’s Champions League final.

“I think he’ll be out of the final but I don’t know. He’s limping, so it’s maybe not the best sign.”