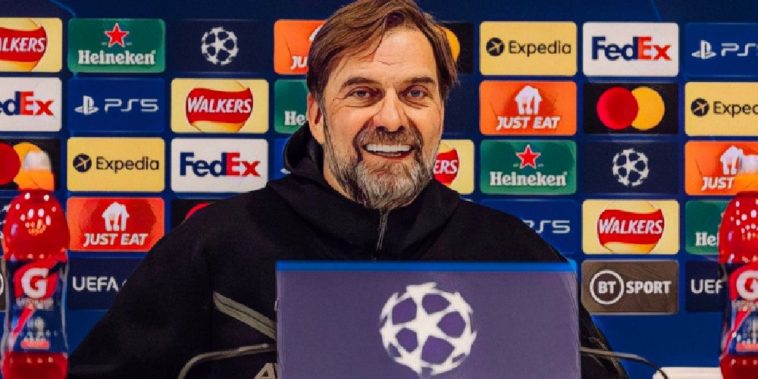 Jurgen Klopp has insisted Liverpool still have plenty to do to ensure their passage to the Champions League final ahead of their semi-final second-leg against Villarreal.

Liverpool earned a 2-0 win at Anfield last week to give themselves a huge opportunity to feature in a third Champions League final in just five years, a Pervis Estupinan own goal quickly being followed up by a Sadio Mane strike to give the Reds an advantage.

Speaking ahead of Tuesday’s second leg at El Madrigal, Jurgen Klopp quickly batted away suggestions that their advantage meant that the tie was already over, describing Villarreal as ‘an exceptional team’.

“If I was younger I’d have been really angry with the question!” the German said at his pre-match press conference.

“Of course, no. It’s only half-time. We have to go there and try to win, knowing they [Villarreal] will go with all they have.

“You never know if we’ll get another chance in a semi-final.

“We have an exceptional team but you need luck, so you had better treat it carefully and we will. If Villarreal beats us with a result, congratulations and that’s it.”

Liverpool have plenty of experience of navigating Champions League semi-finals in recent years, and the German was keen for his side to use that experience to book their spot in the Paris showpiece final later this month.

🗣 "You never know if you will reach the semi-final again"

🗣 "We have an exceptional team here and nothing is for granted"

Klopp looks ahead of Liverpool's game with Villarreal 👇 pic.twitter.com/HkTV9G2hM3

“Maturity and experience is important but not the only decisive thing. Everything that we are is required tomorrow night,” he said.

“We have to be ready to play a top, top game. They will try top lay much more football than we allowed them in the first game.

“Unai [Emery] will sure try to adapt a few things. It will be really interesting. Maturity is important but not the only thing.”

Liverpool have won all of their Champions League games away from Anfield so far this season, and while Klopp expects his side to have to ‘suffer’ against Villarreal, though insisted his side will try to play their regular brand of attacking football.

“We didn’t win the games by siting deep and counter-attacking,” Klopp said.

“We tried to play as ourselves and we have to do that again. We have to be ready to suffer and sit back in moments, but not as a general approach.”

Liverpool are unbeaten in 12 matches, though warned that everything could easily be different if his side start on the ‘wrong foot’ and allow the home crowd to lift their side.

“The thing with all this, we must’ve done something right in the last few months.

“Problem is everything is perfect and then the next game we start on wrong foot and game is different. We know we’re in a good moment. But other way around…why should I think about the past?

“Let’s say Villarreal have the first shot on target, the crowd goes up, they win challenges…that’s how it is.

“Good example is Newcastle, crowd were very intense but we never let it happen [for them]. It was just a clear-cut performance.”