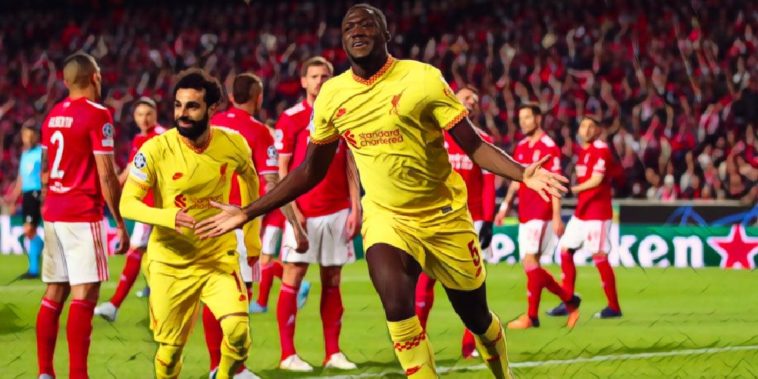 Liverpool put one foot in the Champions League semi-finals with a 3-1 victory over Benfica in an entertaining game in Lisbon.

Liverpool got off to a great start as they took the lead in the 17th minute, a whipped corner from Andrew Robertson being met by defender Ibrahima Kounate, who met the ball unchallenged as he despatched a bullet header past Odysseas Vlachodimos.

The Reds looked to be cruising as they made it 2-0 just after the half hour mark as they doubled their lead in ruthless fashion, former Premier League player Adel Taarabt giving the ball away sloppily in midfield, before the returning Trent Alexander-Arnold played a raking ball from deep to pick out Luis Diaz. The former Porto man unselfishly nodded the ball across the box to find Sadio Mane who finished off the move to net his third Champions League goal of the campaign.

Benfica, however, posed a threat on the break and had a couple of presentable chances before half-time, and pulled one back within four minutes of the restart. Goalscorer Kounate failed to deal with a Rafa Silva cross from the right, the ball landing at the feet of in-demand forward Darwin Nunez who had time to take a touch before calmly slotting beyond Alisson.

The goal really sparked Benfica into life, and they created a number of decent chances as they looked to level the scores, the Portuguese side arguably the better team for spells in the second half with Liverpool looking somewhat sloppy at times.

However, the Anfield outfit netted a potentially vital third goal with three minutes to play, Naby Keita threading the ball into the path of Luis Diaz who took it around Vlachodimos in the Benfica goal before slotting into an empty net.

Speaking after the game, Jurgen Klopp admitted that his side could have defended better at times during the clash, but credited the Benfica goalkeeper for keeping his side in the tie.

“Coming here and winning an away game in the Champions League is tough,” he told BT Sport.

“Benfica fought for their lives, we gave them a little bit too much but they deserved the goal as well, even though we could have defended better – they had counter attacks, it is not easy to keep the ball all the time and the more risk you take, they have really good players.

“It was a tough game, what I expected, the crowd was there, we knew 2-0 is nothing, nice but not more. They score the goal and it was much more open than we wanted but the goalie was probably the best player and made a couple of really good saves – we are two goals up, half-time, let’s keep going.

“We usually score more [in those situations] but we didn’t, mainly because the goalie, credit to him, and that is pretty much the story. We could have scored in the last minute, 4-1 would be nice but we are not in dreamland here.

“We know much more about our opponent, they won at Ajax, we are aware of the quality and have a nice game in between but then we will be ready again.”

Next up for Liverpool is a potentially decisive fixture in the Premier League title race when they take a trip down the M62 to face first placed Manchester City at the weekend.

Read – Salah contract talks ‘resurrected’, but talks of a renewal being close are ‘premature’