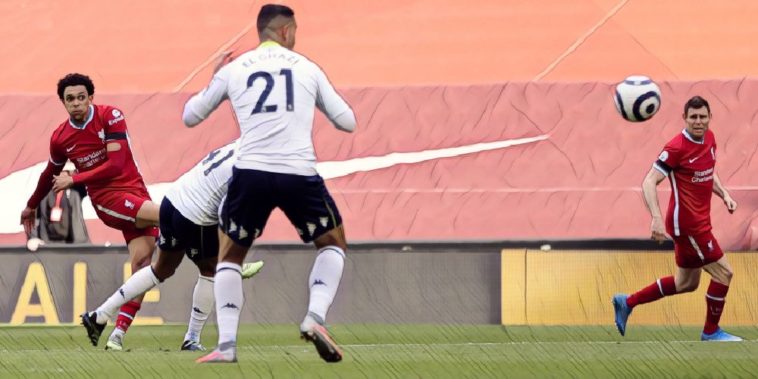 Trent Alexander-Arnold scored a stoppage-time winner to hand Liverpool a 2-1 come from behind victory to finally claim their first league win at Anfield of 2021.

Mo Salah squandered a chance to give Liverpool an early lead after the ball had broken to him following a dreadfully poor touch from Tyrone Mings, only for the Egyptian to go with the outside of his boot to send his effort wide, much to the relief of the Villa defender.

Aston Villa struggled to get out of their own half for much of the first half as they consistently gave the ball away, while Liverpool lacked end product.

However, in the 42nd minute, Villa finally did manage to get themselves up the pitch, striker Oli Watkins receiving the ball, taking a touch, before turning and firing under goalkeeper Alisson, who really should have kept out the England international’s effort which was straight down the middle of the goal.

Liverpool looked to have equalised in first-half stoppage time, Roberto Firmino poking home from inside the box after Andy Robertson’s shot had been blocked, only for VAR to judge that Diogo Jota was offside by the width of an armpit hair in the buildup to see the goal chalked off.

The Reds would eventually pull themselves level 12 minutes into the second half though, Robertson seeing his effort saved by Emiliano Martinez, though his save fell invitingly into Salah who made no mistake at the back post.

Having got themselves level, Liverpool didn’t really lay siege to the Villa goal in the search of a winner, but would eventually take the lead as the game ticked into added time. Again, Martinez produced a superb reaction save to deny Thiago Alcantara before the ball dropped to Trent Alexander-Arnold. The right-back – who has been heavily criticised for his performances of late, particularly against Real Madrid in midweek – took a touch to set himself on the edge of the area, before whipping it into the bottom corner in fine fashion.

37 – @LFC have now scored 37 winning goals in the 90th minute or later in the Premier League, at least 12 more than any other side in the competition. Perseverance. #LIVAVL pic.twitter.com/QjyA7WZCoX

The result was Liverpool’s first win at Anfield since December, seeing them leapfrog Tottenham, Chelsea and West Ham into the top four ahead of the trio’s weekend fixtures.

“We dominated the game but we made one mistake and concede a goal,” he told Sky Sports. “Then we score the equaliser but it’s ruled out for offside.

“At half-time it wasn’t the best mood, you can imagine but the words were OK. I didn’t have to lift them too much, they knew if we continue to play like we did we would create chances again. We dealt with their game really good. It was massive, it felt massive to win. A real relief.

“We were there, we defended well, we were constantly in the creating mood without having 20 clear-cut chances. We needed that win today, these three points feel big.

“We can stop that chat about Trent, everyone agrees that he is an outstanding player. It’s Gareth Southgate’s decision what he does for the squad but we don’t have to talk about it every week. We don’t have to justify the players’ status every week.

“We have to put the other teams under pressure. Everyone knows that when we get on a run we are dangerous.”

Next up for the Merseyside outfit is their second leg fixture against Real Madrid where they will need to score at least twice to overturn a 3-1 first leg deficit.