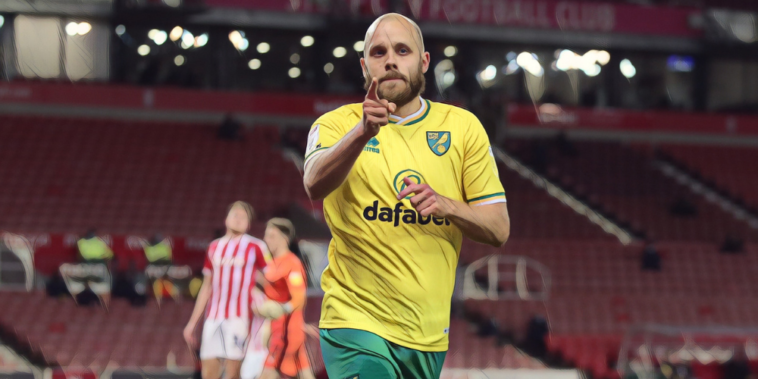 Norwich are back in the Premier League after bouncing back from the second tier at the first attempt, with Daniel Farke’s side crowned Championship winners in 2020/21.

Farke’s Canaries struggled during their previous venture into the top flight two seasons ago, but with confidence high from last season and a series of shrewd summer signings, Norwich will be hoping to consolidate themselves in the Premier League this time around.

Norwich will begin their latest attempt to avoid being labelled as a serial offending yo-yo club with an opening fixture against Liverpool on August 14, so we’ve picked out five players who will be key to the club’s battle to beat the drop this season.

Norwich did well to keep hold of the majority of their key personnel following relegation in 2019/20, including retaining the services of Finland international Teemu Pukki.

Pukki started that campaign on fire with six goals in his opening five fixtures, finishing the season with a respectable 11 league goals despite Norwich finishing bottom of the Premier League.

The 31-year-old once again proved a cut above the Championship to fire the Canaries to promotion last term, netting 26 league goals to take his overall tally in the second tier to 55 goals in just 84 appearances for Norwich.

Now back amongst England’s elite, the goalscoring burden will be firmly placed on his shoulders this season with no other current Norwich player having scored more than six league goals last term, following Emiliano Buendia’s departure to Aston Villa.

Pukki is a proven performer at the highest level with 30 goals at international level and Norwich’s ability to compete alongside England’s elite will hinge on his ability to continue firing after stepping up a division.

Chelsea have allowed Billy Gilmour to depart on a season-long loan deal this summer, as the talented midfielder looks to continue his development with regular first-team football.

Gilmour has made a huge impression since first being handed his opportunity at Stamford Bridge, with the youngster named as man of the match on his full debuts in the FA Cup, Premier League, Champions League and for the Scotland national side.

The 20-year-old will provide class and composure to the Norwich engine room and has proven he is far from overawed when mixing it with the best, the Canaries having landed one of the most promising midfield talents in the Premier League on a temporary deal.

He has already made an impression with a series of strong pre-season showings, lining up in the centre of Daniel Farke’s 3-4-3 system and demonstrating his probing passing range.

Another player Norwich kept out of the clutches of some major clubs last summer, Max Aarons remained at Carrow Road despite watching fellow academy graduates Ben Godfrey and Jamal Lewis depart for the Premier League.

Aarons continued to enhance his reputation as one of the best young full-backs in English football last term, making more league starts than any other Norwich player during their Championship title-winning campaign.

The 21-year-old’s drive from defence is a huge part of Norwich’s attacking play, with only former teammate Buendia registering more key passes from open play in the second tier last season.

Transfer speculation continues to surround the right-back with Tottenham and Arsenal amongst those linked, though Norwich are under no pressure to sell and it would take a sizeable bid for the club to part with the defender so close to the new season.

Another full campaign of Premier League football under his belt with the Canaries could help take the explosive Aarons’ game to the next level.

The funds received from the sale of Buendia to Aston Villa have been swiftly spent on reinforcements, including the intriguing arrival of Kosovan winger Milot Rashica from Werder Bremen.

The 25-year-old has been a regular in Premier League gossip columns in recent seasons and arrives at Norwich having scored 27 goals in 100 appearances across four seasons in the Bundesliga.

Comfortable on either flank or in a central attacking role, the arrival of Rashica will hope to ease the goalscoring burden on Pukki and provide additional creativity following the departure of Championship Player of the Season Buendia.

Rashica – who has six goals in 32 international caps for Kosovo – finished as Bremen’s leading scorer after double-figure hauls in 2018/19 and 2020/21 before a disappointing campaign last term and the star will hope to recapture his finest form following a £9.8m move to Carrow Road.

One of the few bright sparks from Norwich’s relegation season two years ago, Todd Cantwell was one of the surprise packages of the Canaries’ previous Premier League campaign.

The winger scored six league goals and his performances attracted transfer interest, with Leeds having seen a bid rejected for his services following Norwich’s drop into the second tier.

Cantwell missed much of the start of the season given the uncertainty surrounding his future and a hip problem, before returning to the side to play a prominent role in Norwich’s promotion as Championship winners.

He scored six goals and provided a further six assists and will central to the club’s success once again, the 23-year-old set to shoulder added creative responsibility following the exit of Buendia.

Cantwell has once again been linked with an exit with Aston Villa reportedly interested in his services, Norwich facing a decision to make on a player entering the final year of his deal – though the club do have the option to extend by a further 12 months.