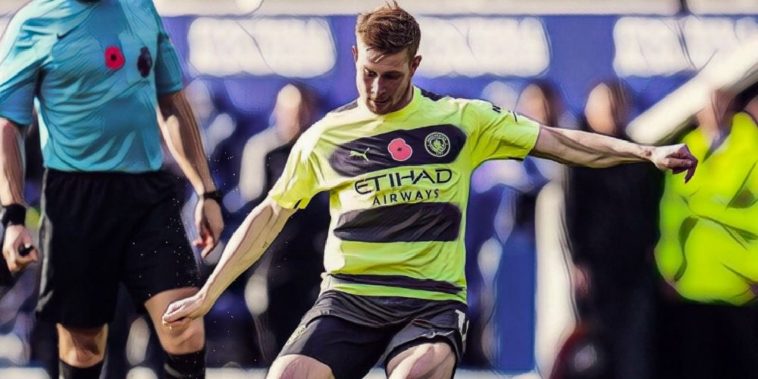 A fantastic Kevin de Bruyne free-kick earned Manchester City a 1-0 win over Leicester City to move them to the top of the Premier League.

Manchester City were dealt a pre-match blow as Premier League top scorer, Erling Haaland, was not named in the matchday squad, a piece of news that led Brendan Rodgers to joke that he had holes in his knees from “sliding around the kitchen” in delight – a feeling probably not shared by the vast majority of FPL players.

The Premier League champions dominated proceedings from the off at the King Power stadium, though, in truth, the opening 45 minutes was far from an entertaining affair, with Leicester happy to sit back and try to stifle the visitors.

That resistance would be broken just four minutes after the interval though, Kevin de Bruyne dispatching an absolute peach of a free kick from 25 yards out, the Belgian’s dipping effort beating Danny Ward and going in off the inside of the post to register his 60th goal for the club.

Youri Tielemans did see a rasping effort tipped onto the bar, though otherwise, City ‘keeper Ederson was largely untroubled, despite an improvement from Leicester in the final 20 minutes following the introduction of Kelechi Ihenacho and Patson Daka.

Speaking after the game, Pep Guardiola said it was a ‘difficult’ game against the deep-lying Foxes, before praising Kevin de Bruyne’s ‘amazing’ match-winning performance.

“They changed it and it was a difficult game, because they had 10 players so deep and it’s so difficult,” he told BT Sport.

“After we scored the goal they changed their rhythm and in the Premier League the last few minutes are always difficult. It’s a massive victory for us.

“Kevin de Bruyne is back. He was not playing good the last few games but today he was amazing. He knows it. There was no space today, we had to be patient.”

Meanwhile, the City goalscorer echoed the sentiments of his manager, before saying that the victory proved they could win without their talismanic striker.

“We made it difficult for ourselves, we were a bit tired,” De Bruyne said. “They were very negative for 70 minutes but then their changes made it a different game. We didn’t keep the ball in their half but we still could have scored a second.

“The free-kick goes perfectly, luckily it’s 1-0. Ederson has been great, sometimes we only talk about his distribution but he’s a great keeper and he proves it every week.

“We have proved we can win with or without Erling Haaland.”