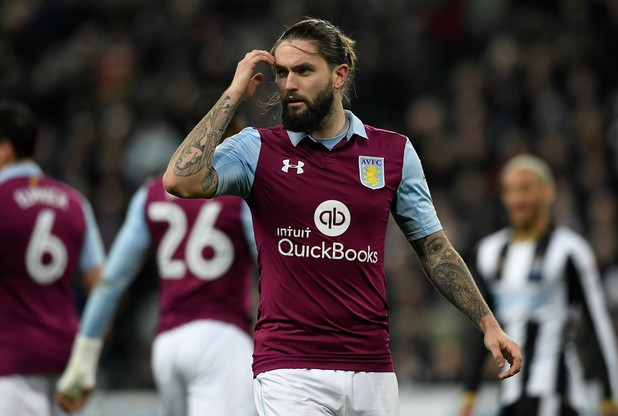 Magpie captain Jamaal Lascelles admitted that the second goal of the game was an embarrassment on Villa’s point of view. Henri Lansbury was once again the centre of attention against Newcastle United as he bundled the ball into his own net to put the Geordies 2-0 up. It was an occurrence of Karma because of the fact that he got two Newcastle players sent off earlier in the season when he represented Nottingham Forest by play acting on both occasions.

One change was made to the Newcastle eleven; Dwight Gayle returned after one month on the side-lines after his hamstring injury. The Championship’s top scorer was hopeful to add to his twenty goals so far this campaign.

Four changes were made to the Villa line-up who lost 3-1 at home to Barnsley. Bjarnason, Elphick and Taylor replaced Adomah, Amavi and Baker. Jack Grealish dropped to the bench for Mile Jedinak, who returned to the squad after a groin injury which also side-lined him for a month alike Dwight Gayle.

An early chance came across for Villa which should have been given offside. Scott Hogan flicked a high ball onto Birkir Bjarnason at the back post. The Icelandic international only had to direct his shot into an open net. However the ball came off the midfielder’s shin and it flew into the section off home fans behind the goal. A massive let off for the hosts.

The first half was an extremely boring affair for the neutrals because of limited chances, but the fans within the stadium were entertained by the electric atmosphere of St James’ Park.

It was on the thirty minute mark when the first clear cut chance of the game arrived. Jonathan Kodjia drove down the left flank before releasing a powerful shot. His effort deflected off DeAndre Yedlin and almost dropped into the net. Karl Darlow was alert and tipped the ball over the bar.

Ten minutes later Newcastle were awarded a corner; Matt Ritchie whipped in a dangerous cross. The ball fell in the six yard box before three Villa defenders failed in their attempts to clear. Aleksandar Mitrovic did well to play the ball into the feet of Yoan Gouffran. The Frenchman easily stabbed the ball past Sam Johnstone to make the score 1-0.

In stoppage time before half time, it was nearly 2-0 when Mitrovic leapt above Alan Hutton. Unluckily the big Serbian saw his effort rise above the bar. It was warning signs for the visitors who had a lapse in concentration despite defending brilliantly so far in the match.

After the break Jonjo Shelvey stood over a free kick within shooting range. The midfield maestro fired his shot towards the bottom corner which made Johnstone pull off a good save.

Minutes later, the home side were given a series of corners. The first one was driven to the front post and dealt with easily by Henri Lansbury. The following corner was also driven to the front post and was met by the head of sipper Jamaal Lascelles. His effort was stopped by Lansbury on the post, but the ex-Nottingham Forest captain could not adjust his feet in time and eventually back-heeled the ball into his own net. Screams of joy echoed around St James’ and the team sprinted over to the fans in the corner.

There were even louder roars from the home supporters when the stadium announcer revealed that it was a Henri Lansbury own goal. The Villa number five could only look at the floor regretting what he did to this club in the past. It was Karma at it’s finest.

Bjarnason was given another easy opportunity at the other end. He was one on one with Karl Darlow but the Icelandic saw his shot saved in a world class fashion. It was another one in the collection of great Karl Darlow saves this season.

At the other end, Paul Dummett raced down the line before giving the ball to Matt Ritchie. The Scotland international was clearly fouled by Tommy Elphick but there was no decision given in his favour. The winger quickly jumped back to his feet and drew a save out of loanee from Manchester United Sam Johnstone.

In the final ten minutes, Jonathan Kodjia cleverly shot a volley from a cross but the Ivorian missed the target narrowly.

A worry for Villa

There was a brief delay in play before the final whistle when Scott Hogan landed on his ankle very awkwardly and was clearly in major discomfort. The new signing from Brentford received treatment and was then stretchered off to a standing ovation from both sets of fans. Hopefully it is not an early set-back in his career at Aston Villa.

The Toon Army gained another three points in their bid for promotion and play again at home on Saturday against Bristol City, who will be without their top scorer and star player Tammy Abraham. After that it will be a sequence of tough away matches against three teams that are sniffing up their backs for automatic promotion places.Aston Villa need to start picking up points or else they may fear back to back relegation. It could be a long time outside the first tier of English football for them.