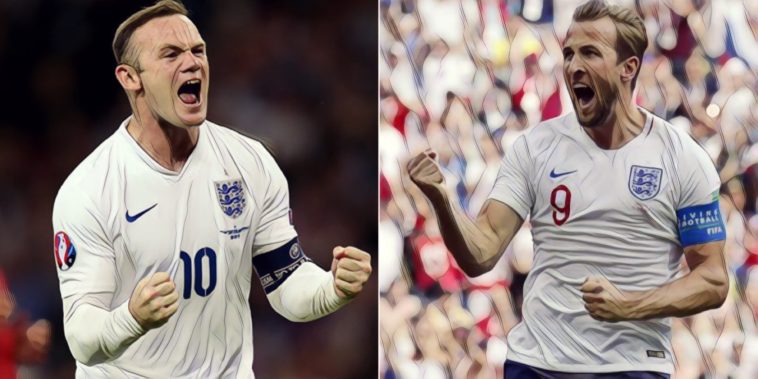 Harry Kane has backed himself to become England’s all-time record goalscorer and admits he would be ‘disappointed’ should he not surpass Wayne Rooney’s landmark.

The Tottenham forward has proven prolific on the international stage since making his England debut five years ago, scoring 32 goals in just 45 international outings while winning the Golden Boot at the 2018 World Cup in Russia.

Kane’s record makes for impressive reading and now established as the Three Lions’ captain under Gareth Southgate, the 26-year-old has set his sights on further success and eclipsing Rooney’s all-time record of 53 England goals.

“Looking at it now, I’d be disappointed if I didn’t get to that amount,” Kane told Jamie Redknapp during a live chat on Instagram.

“I’m a confident guy and I feel that if I carry on playing for England for the next five or 10 years, for sure it’s a record I want to be beating. We’ll have to wait and see.

On this day in 2015, Harry Kane made his England debut 🏴󠁧󠁢󠁥󠁮󠁧󠁿

“I’m still 21 goals away so there’s still a bit more time. I’m confident if I stay fit and healthy, I’ll be able to catch that one up.”

Kane’s prolific goalscoring record has also led many to speculate whether he could reach Alan Shearer’s Premier League record, the former Blackburn and Newcastle star having scored a staggering 260 top-flight goals.

The Spurs’ star currently has 136 Premier League goals in just 201 appearances for the north London side and while Shearer’s milestone is still some way off, Kane believes the figure is within his reach should he stay ‘injury-free’ and remain in English football.

“Staying injury-free and staying in the Premier League is a big factor to that. If I’m playing Premier League football for the next 10 years, then I’d back myself to get to that record, but in football, a lot can happen and a lot can change.

“That record is still a bit too far away for me to be thinking about just yet, but it’s something that’s in the back of my mind. Of course, it would be great to score the most goals in the Premier League by one player.

“Shearer has put that record out there, and no one’s got close to it yet so we’ll have to wait and see.”

Shearer argues the case for Aguero being better than Premier League legend, Henry