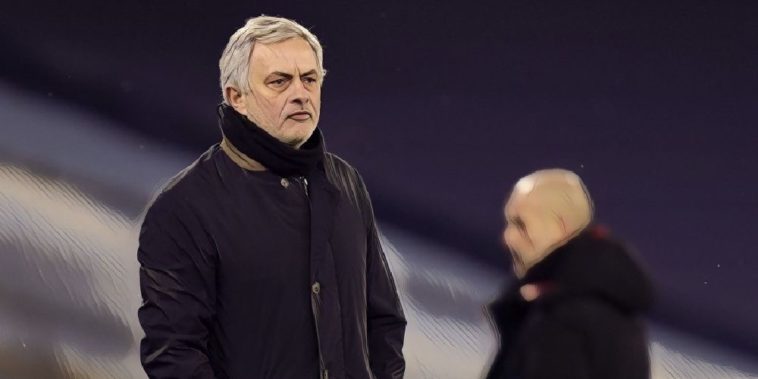 Jose Mourinho has been sacked by Tottenham following talks with the club’s hierarchy today.

Tottenham have endured an indifferent campaign during Mourinho’s first full season in charge, with the north Londoners currently seventh in the Premier League and five points adrift of the Champions League places with just six fixtures remaining.

The club’s poor performances over the second half of the season have now led to his departure, with Sky Sports amongst multiple sources to have confirmed his exit as head coach.

Mourinho was appointed as Mauricio Pochettino’s successor in November 2019 following the Argentine’s dismissal, but has largely struggled to show tangible signs of progress with the club having faltered following a bright start to the 2020/21 season.

Spurs’ struggles domestically have coincided with an early elimination from European competition, surrendering a 2-0 first-leg lead to lose to Dinamo Zagreb in the Europa League.

The pressure has increased on Mourinho in recent weeks with the club’s style of football having been criticised, a 2-2 draw at Everton on Friday evening appearing the final straw for the Spurs board who have dismissed the Portuguese from his position.

Spurs have won just one of their past five fixtures, whilst no side has dropped more points from winning positions this season.

The timing of the decision has come as a surprise with Spurs set to face Manchester City in the Carabao Cup final on Sunday, as the club look to end a 13-year wait for major silverware at Wembley.

According to the Telegraph, first-team coaches Ryan Mason and Chris Powell will take charge until the end of the season as the board consider permanent replacements.