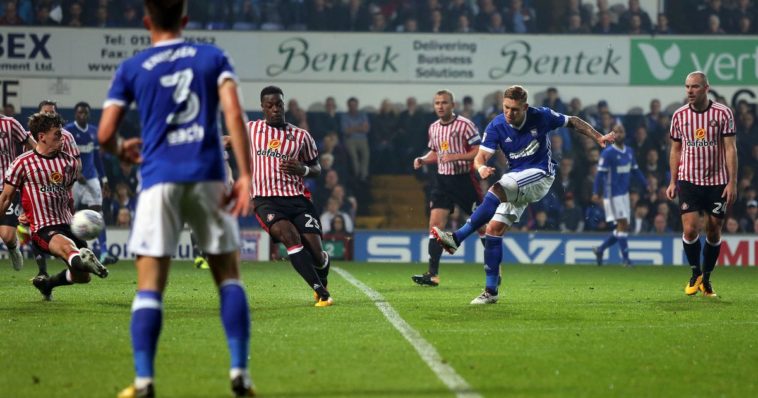 Sunderland travelled to to Portman Road in poor form. Grayson’s men sat third from bottom and with only one league win all season it wasn’t looking good for the Black Cats.

Jason Steele started in goal with Didier Ndong dropping out for Darron Gibson as well as a return for Irishman Aiden McGeady.

Former Sunderland academy star Martyn Waghorn, born in the nearby town of South Shields, opened the scoring for the Tractor Boys after flicking on Joe Garner’s cross – a goal made by the ex Rangers duo. Laminé Koné made a half hearted attempt to deny Waghorn from latching onto the cross but failed miserably. Jason Steele should’ve done better in preventing the goal.

Makeshift centre half Billy Jones then flicked on Aiden McGeady’s ball in and past Ipswich goalie Bartosz Bialkowski to make it 1-1. This gave the travelling fans some hope.

Martyn Waghorn then tested local lad Steele when he got a touch on the ball in from the left. The Newton Aycliffe born shotstopper got a hand to it and turned it away from danger.

The hope was short lasted though as central defender Jordan Spence headed Ipswich back into the driving seat. The big centre back connected with Waghorn’s delivery from a corner ball and put it beyond the reach of Steele.

Former Rangers man Garner then tested Steele from an acute angle, the goalkeeper failed to make a strong save. It was down to centre back Jones to clear it off the line.

The second half arrived and the first opportunity fell for the visitors. Skipper Lee Cattermole had his header turned over by the Polish Bialkowski after McManaman’s cross was poorly dealt with.

Eventually Ipswich got their third, this coming through Bersant Celina. He hammered the ball past the diving goalie after Waghorn’s clever heel flick to him.

Five minutes later, on the hour mark, Irish hitman David McGoldrick made it 4-1 to Mick McCarthy’s Tractor Boys. Waghorn was again the problem for the red and white defence; he played the ball into the area, McGoldrick had the initial shot saved by Steele. He made no mistake second time though, squeezing it in the corner.

Sunderland did pull one back with Irish wing wizard Aiden McGeady hitting an absolute peach into far corner. The winger received the ball off Lynden Gooch before curling it from the edge of the box into the bottom right corner.

Minutes from the full time whistle Grant Ward made it five. Good pushing by McGoldrick after Ipswich won it in the middle of the park. The striker then slotted it through for Ward who rounded Steele and then smashed it in the empty net. This giving manager Mick McCarthy a perfect result against his former employers. However, this turned up the heat on Black Cats gaffer Simon Grayson.

Sunderland go into a crucial fixture against Grayson’s former side: Preston North End at Deepdale on Saturday. This being a must win game in the eyes of most fans, especially as Birmingham City are hot on the tails of the Black Cats.