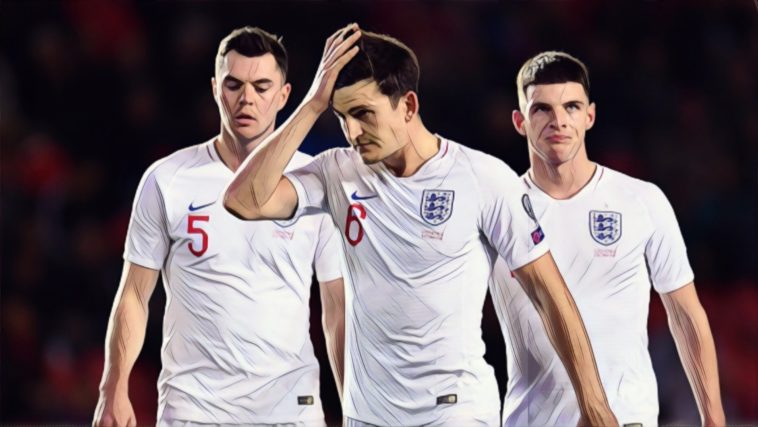 Recapping and reviewing the performances of Premier League players on international duty in Europe this past week.

Harry Kane continues to pad his goal tally with penalties, but it wasn’t enough to save England as they lost 2-1 to Czech Republic, their first qualifier defeat in almost exactly a decade, when they lost 1-0 to Ukraine during World Cup qualification in 2009.

The Czechs looked slick on the night and full value for their win, a stark contrast to the Three Lions who bore greater resemblance to mewling kittens. Michael Keane brought his Everton form to the national team, losing his marker for the first goal, while West Ham‘s Declan Rice also put in a poor shift.

Is it time for Eric Dier to retake his position in place of the man who was thrice capped for the Republic of Ireland? This defeat might also prompt Gareth Southgate to start putting James Maddison and Aston Villa‘s Jack Grealish in the team to give them that much needed creative spark.

20-year-old Mason Mount also made his full debut for the national team, who remain on top of Group A on goal difference.

Ireland played out a dismal 0-0 game in Georgia on Saturday, in which they had seven Premier League players lining out in green. Mick McCarthy’s men had 44% of the ball during the goalless draw and could only manage seven shots, half of what their hosts produced.

The few bright sparks for Ireland was John Egan of Sheffield United putting in a Man of the Match performance at the back, while Shane Duffy was also solid at the back having just returned from injury and produced one of only three attempts on target. His Brighton teammate Aaron Connolly also made his debut, coming off the bench in the 79th minute, after his impressive full debut for the Seagulls last weekend.

Their two main rivals in Group D faced off later that same day, with Denmark coming out on top with a 1-0 win over Switzerland. Leicester City goalkeeper Kasper Schmeichel put in a stellar display, making four huge saves on the night.

Wales did at least score as Manchester United‘s Daniel James provided the assist for Kieffer Moore in their 1-1 draw with Slovakia. Ethan Ampadu, on loan at RB Leipzig from Chelsea, played well, while Martin Dubravka of Newcastle United also putin a shift in goal for the Slovaks.

There was heartbreak for Northern Ireland, however, as they came so close to causing an upset at De Kuip, but the Netherlands staged a late comeback to win 3-1. Jonny Evans put in a top display at the back, but the Green and White Army ultimately lost to a late brace from former Man United forward Memphis Depay and Barcelona’s Frenkie de Jong.

Scotland had an absolute nightmare in Russia though, losing 4-0 to the 2018 World Cup hosts. Liverpool‘s Andy Robertson didn’t get nearly enough traction down the left-hand side as the Scots failed to get going in attack and were awful in defence in the second half.

Elsewhere, Olivier Giroud might not be getting much game time for Chelsea, but he scored the winner in France’s 1-0 victory over Iceland, keeping them joint top of Group H with Turkey. Everton’s Cenk Tosun scored the winner for the Turks in a 1-0 win over Albania.

Tottenham Hotspur’s Toby Alderweireld, Crystal Palace’s Christian Benteke, and Youri Tielemans all grabbed a goal each in Belgium’s nine-goal destruction of lowly San Marino. The Red Devils have a 100 per cent record in Group I and can start planning for Euro 2020 with three games left to play in qualification.

Jorginho scored a penalty for Italy against Greece, Manchester City‘s Bernardo Silva netted in Portugal’s 3-0 win over Luxembourg, and there was some late drama in Norway.

Spain were on the precipice of qualifying for Euro 2020 on Saturday night as they held a 1-0 lead over the hosts. The Norwegians played tremendously well, but a piece of class from Saul Niguez separated the two sides. That was until the match reached injury time, when Chelsea’s Kepa Arrizabalaga failed to deal with a cross in the box and nearly knocked out Omar Elabdellaoui in the process.

Referee Michael Oliver awarded a penalty, which Cherries striker Joshua King duly dispatched in the 94th minute to secure his team a point and keep them in contention for automatic qualification in Group F. King now has four goals and two assists in this campaign to add to the two goals and two assists he has provided for Bournemouth in the Premier League this year.

Yours truly was present for the sellout at Tallaght Stadium on Thursday evening to see Ireland take on Italy in Euros U21 qualifier. Although there were a few empty seats, there were 7,231 people in attendance to watch Stephen Kenny’s young side play, which is a massive crowd for a game like this.

The atmosphere was electric at times and the excitement around this team is palpable. It’s been a while since Ireland have had a youth team coming through that had so much potential, with the entire starting line-up filled with talented prospects tipped for great things in the future.

The Boys In Green more than held their own against the Italians, who featured some established Serie A players and Premier League stars such as Wolves‘ Patrick Cutrone and Everton forward Moise Kean. Jayson Molumby, another one of Brighton’s Irish contingent who is currently on loan at Millwall, played very well in midfield and almost had the winning of the game with a stunning strike late on.

Norwich City frontman Adam Idah was a handful for the Italian defence all night, and I thought Southampton‘s Michael Obafemi was brilliant when he came on in the second half.

Unfortunately, the talking point of the night was an incident between Kean and Spurs‘ Troy Parrott. The Toffees man pushed Parrott, who comically went down grabbing his face. Kean received a straight red while Parrott was shown a second yellow card. It was a strange decision by the referee, who could have handled the flashpoint a lot better.

Italy's Moise Kean is shown a straight red card for pushing Troy Parrott, but the Tottenham forward is then shown a second yellow card for his own role in the incident.#IRLU21 #U21EURO pic.twitter.com/gEVRYkyKSA

Parrott is being tipped as Ireland’s next great striker, along with Galway man Connolly, but his antics here and the tantrum he threw on the way to the dressing room were frankly embarrassing. The 17-year-old played well otherwise, but needs to work on his temperament if he is to make the step-up to the next level.

The match ended goalless, a well-earned point for both sides, although it was the Irish who were pushing hardest for a winner in the late stages of this contest. They remain top of Group A with 10 points, unbeaten after four matches, while Italy sit third with four points having only played twice.