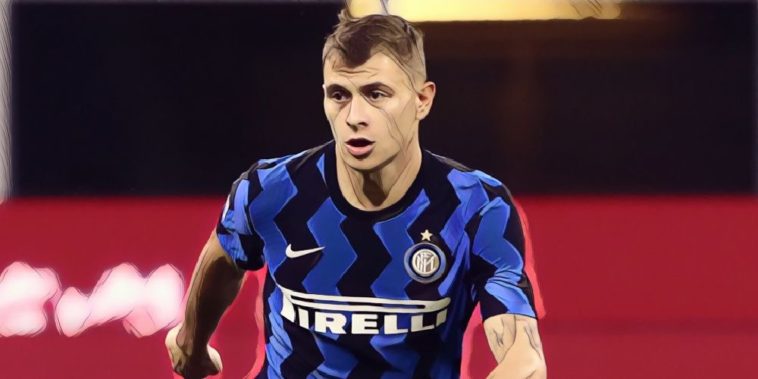 Inter Milan midfielder Nicolo Barella is reportedly not for sale ‘at any cost’, amid rumoured interest from both Liverpool and Tottenham Hotspur.

The 24-year-old has enhanced his reputation with a string of fine displays at Euro 2020 for Italy, memorably netting against Belgium in the quarter-final victory en route to the Azzurri’s eventual triumph in the final over England.

The all-action midfielder went into the tournament off the back of a fine campaign for Inter in Serie A, the club securing a first league title in over a decade under Antonio Conte, with Barella netting three times in 35 league games.

Following that triumph, the Italian side has taken a hit with the departure of Conte due to a dispute with the club’s owners, with their ongoing financial problems also seeing first-team star Achraf Hakimi sold to Paris Saint-Germain.

The potential need to generate funds has seen the likes of Romelu Lukaku and Barella linked with an exit, although according to Marca, the latter man is not for sale ‘at any cost’.

The player has previously been linked with a move to Liverpool with the Reds seeking a suitable replacement to Gini Wijnaldum, who has secured a move to PSG on a free transfer.

Barella has also been linked with a switch to Spurs as part of new boss Nuno Espirito Santo’s rebuild, although the club’s lack of Champions League football would no doubt work against them, even if Inter were keen to sell.

As per the report, the Italian side view the player as a potential future captain and are keen to reward him with a bumper new contract to ward off any possible suitors, despite suggestions that both Premier League sides were readying bids in the region of €60-70million.

Their need to sell has also seemingly been lessened by the sale of Hakimi and the exit of Conte, with their financial situation improved by generating funds and getting both off the wage bill.