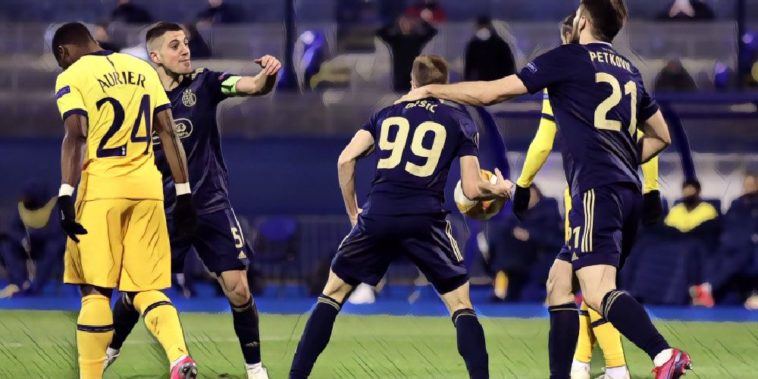 Jose Mourinho made seven changes from the side that slipped to defeat in the North London derby on Sunday, yet despite the alterations, Spurs laboured to get a foothold as the hosts took control of the opening exchanges.

The biggest chance of the half arguably fell to the Croatian side, midfielder Lovro Majer somehow dragging his effort wide after having looked certain to put a dent in Spurs’ 2-0 first-leg advantage.

As for the visitors, their one and only shot on target of the half came on the stroke of half-time, last week’s goalscorer Harry Kane seeing his strike well saved by Dominik Livakovic from the angle.

The interval seemingly did little to improve the visitors limp display as they began the second period as they had ended the first, with that sluggishness proving costly as the home side took the lead on the night, Mislav Orsic with a sublime curling effort to set to up a nervy last 30 minutes for Mourinho and co.

With less than 10 minutes remaining, that man Orsic netted his second to bring Zagreb level in the tie, the forward finishing brilliantly after an excellent pull back from substitute Iyayi Atiemwen.

Spurs thought they’d snatched a winner moments later, yet Harry Kane’s header was agonisingly cleared off the line, with the game thus heading into an unwanted extra-time for the Premier League side.

After a slight improvement in first-half of the extra period, Spurs then conceded their third of the night less than a minute into the final 15 minutes, Orsic completing his hat-trick in stunning style, the Croatian driving at the heart of the defence before unleashing a superb strike past Hugo Lloris from just outside the box.

While the away side threw on Steven Bergwijn late on in a desperate bid for a crucial late goal, their lacklustre overall display was ultimately punished as they crashed out of the competition.

Mislav Orsic took 7 shots [4 on target] to score his hat-trick vs. Spurs.

Following that 3-2 aggregate defeat, Mourinho was particularly critical of his side’s ‘attitude’, although he was full of praise for Spurs’ impressive opponents.

“If I forget the last minutes of extra-time, where we did something to get a different result and go through, in the 90 minutes and first half of extra-time was one team that decided to leave everything on the pitch,” he told BT Sport.

“They left sweat, energy, blood. In the end, they left even tears of happiness. Very humble and committed. I have to praise them. On the other side, my team. I repeat, my team. They didn’t look like it was playing an important match. If for any one of them it is not important, for me it is.

“For the respect I have for my career and my job, every match is important. For every Tottenham fan at home every match matters. Another attitude is needed. To say I feel sad is not enough. What I feel is much more than sadness. I just left Dinamo dressing room where I went to praise the guys and I feel sorry one team is not my team won the game based on attitude and compromise. I feel more than sad. That is it.

“Football is not just about players who think they have more quality than others. The basis of football is attitude. They beat us on that. I told the players the risk of playing the way we were. It happened because I believe the players only realised it was at risk when they scored the second.

3 – This was the third time José Mourinho lost a match in European competition by a three-goal margin, with two of those coming with Spurs (also vs RB Leipzig in March 2020) and another with Real Madrid (vs Borussia Dortmund in April 2013). Spursy. #UEL pic.twitter.com/t4qu0NYvj8

“I never like the feeling of some guys in football that say ‘I won, they lost’. For me, ‘we won, we drew, we lost’. I didn’t run away from that. I am disappointed for a difference of attitude of one team to another. I feel sorry that my team is the team that didn’t bring to the game not just the basics of football but the basics of life, which is to respect our jobs and to give everything.

“Sad is not enough. I totally respect everything that somebody connected or not connected with the club says about us tonight. I think we have to accept the problem is if some accept in the positive way in the sense of feeling hurt or ashamed with the critics. Another story is if you don’t care or feel it. That is a much deeper problem. I don’t need external critics. I feel deeply hurt with what happened with my team.

“I can only apologise to the Tottenham supporters. I hope they feel the same way I feel. Today is live or die and in this moment we die. In some other matches I have the same feeling. Until the last day of the season we have to try and do our best.”

Tottenham face a tough trip away to Aston Villa on Sunday evening, before league action takes a brief pause for the international break.