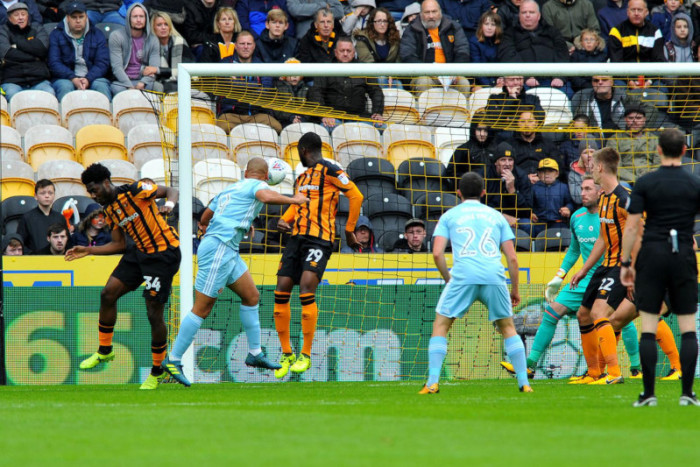 Two of last seasons relegated Premier League teams played out a 1-1 draw on Humberside as Hull and Sunderland met once again.

Sunderland went into the game with only one fit senior striker after Lewis Grabban’s injury agaisnt Forest midweek, Adam Matthews retained his place in the starting 11 as did newboys Jonny Williams, Marc Wilson and Callum McManaman. Lamine Kone came in for Tyias Browning who ultimately cost the Wearsiders the matchh on Tuesday night.

Leonid Slutsky’s side had scored four in their previous home games, despite a defeat at Craven Cottage midweek. Former Black Cats Fraizer Campbell and David Meyler satrted on the bench, whereas Sweden international Sebastian Larsson started for the former Russia manager’s side.

In another pretty uneventful Sunderland game, Hull had the first chance despite Sunderland’s early domination. It came for on loan Chelsea full back Ola Aina who fired a ball across the six yard area, which Ruiter could only push out back into the danger area but midfielder Ndong cleared away. For once, Sunderland actually capitalised on their early dominance when McManaman’s cross was met by James Vaughan’s head, who’d peeled off round the back and got in front of Aina. The ex Everton man nodded into the bottom left corner past the helpless former Rangers goalie McGregor. This was the Englishman’s first striker for the club despite signing in early July and missing two penalties, some fans even branded him a “new Altidore”. He celebrated with his trademark by kicking the corner flag down.

Not long after this Sunderland started to look dangerous as Vaughan outstrengthed and got the better of Hull’s summer recruit Hector and forced the Scotsman McGregor into a save with his legs at his near post.

Nothing else really happened first half apart from a few half chances for the home side, Dicko had a shot about 5 yards wide was the closest to a goal. Again, the Black Cats failed to close down on the edge of the area, Seb Larsson’s free kick against his former club sailed over.

After the break, Sunderland seemed to step off the peddle and put 11 men behind the ball, reminisent of the Martin O’Neill era, parking the bus when only 1-0 up. The Sunderland goal was peppered by chances, and Dutchman Robbin Ruiter was called into action when Polish winger Kamil Grosicki headed back across goal, forcing a superb save by the ex Utrecht goalie.

Some good footwork at the other end by McManaman on the counter attack forced a super reflex save by McGregor.

Campbell was substituted on for the ex Wolves striker Nouha Dicko and it had immediate effect as his shot from range was just inches over getting fans out of seats. Grosicki’s header back across goal looked like it could’ve been dipping in past Ruiter but Campbell, hungry for a goal against his former employers came rushing in and headed the ball very high and very wide.

The goal did eventually come and a deserved equaliser for the Tigers from a former Sunderland youth player David Meyler who’d been brought on at half time; it was certainly coming and poor tactics of all out defence ultimately cost the visitors. Meyler was played in by former Sunderland striker Fraizer  Campbell before taking it further into the box unchallenged. His tame toe poke at Ruiter’s goal deflected off Lamine Kone’s foot – wrong footing the Dutchman who failed to deal with it and went through his hands and into the net just minutes from time.

This point on the road for Sunderland meant they had more points away from home than at home, it also ended a 4 losing streak for Grayson’s men.