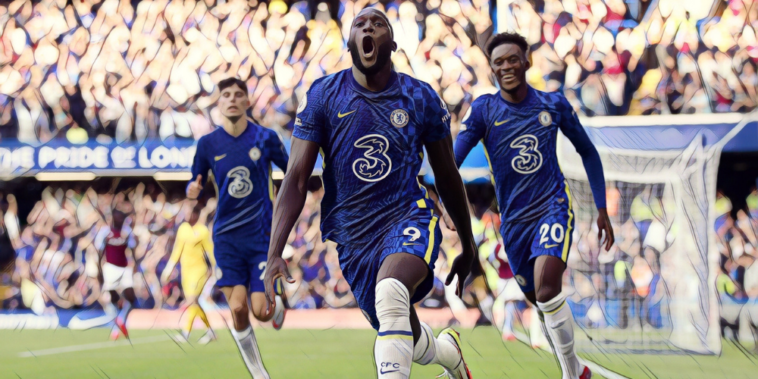 Manchester United moved top of the division after a Cristiano Ronaldo-inspired win against Newcastle, though both Chelsea and Liverpool moved level on points with the early league leaders after maintaining their unbeaten starts to the season.

Manchester City remain in pursuit of the top trio after winning a close-fought clash at Leicester, whilst both Arsenal and Wolves registered their first points of the season after beating newly-promoted Norwich and Watford respectively.

Just in case you hadn’t heard, Ronaldo is back!

The return of the five-time Ballon d’Or winner to Manchester United has sent excitement levels through the roof at Old Trafford, with those who filled inside the famous old ground on Saturday bursting with anticipation.

Newcastle’s lack of ambition had briefly threatened to spoil the day, but first-half stoppage time brought the home crowd the moment they had craved as the number seven wheeled away in delight after re-opening his account in club colours.

A second goal – more classic Ronaldo than his simplistic first – followed in the second half, as the Portuguese icon raced away to double his tally and reintroduce himself to the Premier League in dream fashion.

Ronaldo’s return has raised hope that the Red Devils can return to their perch as England’s finest and whilst it remains to be seen whether the 36-year-old can elevate the side to those levels, it’s certain that the buzz is back.

Japhet Tanganga has been a leading performer in Spurs‘ strong start to the new season, though the academy graduate and north London side were brought down to earth with a bump across the capital this weekend.

Three wins and three consecutive clean sheets were followed by a humbling at Crystal Palace, with Tanganga’s five minutes of madness leaving his side in the lurch at Selhurst Park.

The 22-year-old started in a central role as Emerson Royal made his debut at full-back, but wilted under the pressure as the Eagles grew in confidence following an unconvincing start to the game.

Tanganga was cautioned followed a crude challenge on Wilfried Zaha that sparked an angry reaction from the winger, before earning a second booking just moments later following a lunge on Jordan Ayew.

It was a moment of ill-discipline that cost his side dearly as the dominant hosts pushed forward to secure all three points, a performance to forget for the academy graduate and a lesson learnt.

Odsonne Edouard will have no doubt been dreaming of making an impact ahead of his Premier League debut, but even the Crystal Palace forward could not have envisaged how well his maiden appearance for the club would go.

Introduced as a substitute with just seven minutes remaining against Tottenham, it took the deadline day signing from Celtic just two touches and 28 seconds to open his account for the Eagles and seal the first win of the Patrick Vieira era.

Edouard’s sharp finish doubled his side’s advantage as Palace dominated against a lacklustre Spurs, before adding a second goal in stoppage-time to announce himself as a new hero at Selhurst Park.

The 23-year-old has scored goals prolifically in Scotland in recent seasons, but the early indication is that Edouard can continue to fire after moving south of the border.

Antonio’s first booking came after throwing Jack Stephens to the ground in frustration, with the league’s leading scorer failing to find a breakthrough against the Saints.

Antonio has been showered with praise in our columns following an exhilarating start to the season, but his rash decisions this weekend leave West Ham – who failed to sign centre-forward cover this summer – short of firepower, with Manchester United the visitors to the London Stadium next weekend.

Chelsea spent a record-breaking £97.5m on Romelu Lukaku to make the difference when it mattered most.

Saturday evening’s clash with Aston Villa was perhaps the perfect example of how that fee was justified, the forward finding himself as the match-winner despite spending much of the clash on the periphery.

With the west Londoners far from their best, it was the Belgian who provided the platform for three points, racing onto Mateo Kovacic’s perfect pass before chopping inside Axel Tuanzebe and firing home.

His first was a showcase of composure and clinical touch, whilst his second – sealing three points in stoppage time – was an emphatic finish from a player who has returned to Chelsea as a complete centre-forward.

Aston Villa were unfortunate to find themselves trailing at half-time against Chelsea, with the visitors having had the better of the opportunities in an open and entertaining first 45 minutes at Stamford Bridge.

The good work of Dean Smith’s side was undone just moments after the interval, however, as Tyrone Mings’ sloppy back pass was intercepted by Mateo Kovacic to double Chelsea’s lead and all but end Villa’s hopes of a comeback.

It was a gift from the Aston Villa captain, who also committed himself far too easily after being beaten by Cesar Azpilicueta in the build-up to Romelu Lukaku’s second goal.

The trip to Leeds shaped as a potential banana skin for Liverpool, with the home side roared on by a vocal support as a capacity crowd welcomed one of the Premier League’s ‘big six’ to Elland Road for the first time since 2004.

After weathering some initial pressure, the Reds began to control proceedings with the metronomic Thiago Alcantara in full flow in the Liverpool engine room.

Thiago received criticism during a testing debut season in the Premier League last term as he struggled to replicate his Bayern Munich performances, but this was a reminder of his quality in possession as he ensured a professional performance from Liverpool ticked over.

Suggestions that the Spaniard could be overrun or slow down the tempo of his side were dispelled at Leeds, with the assured presence of Fabinho alongside him bringing the best from the 30-year-old.

Thiago’s first start of the season was a masterclass in finding angles and penetrative passing, a hugely encouraging sign for a Liverpool side who have started the season strongly.

Thrust into the side for his Premier League debut, a first appearance in Chelsea colours proved difficult for deadline day signing Saul Niguez.

The Spaniard was given a testing welcome to English football by Aston Villa’s industrious midfield, with John McGinn in particular continuing to escape his attentions as the visitors went toe-to-toe with the European champions in the first half.

The half-time whistle sounded with Saul having struggled as Tuchel made the swift decision to remove the midfielder at the interval.

Jorginho’s introduction allowed Chelsea to exert a level of control in the second half and secure a flattering 3-0 win, and both the Italian and Mateo Kovacic should be leaned on by Saul as he adjusts to the demands of Premier League football.

Both players initially disappointed before emerging as central figures at Stamford Bridge and Saul has both the quality and schooling at Atletico Madrid to improve drastically on a difficult display.