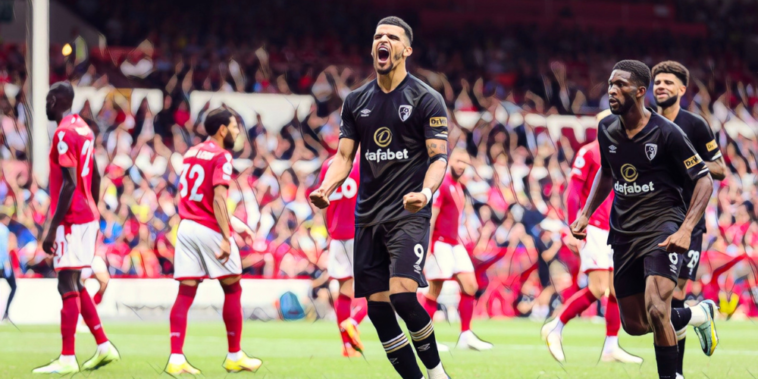 It’s perhaps no coincidence that Bournemouth’s three results this season have come in Dominic Solanke’s three starts, with the forward underlining his importance to the Cherries cause once again this weekend.

Solanke struck 30 goals last season to fire Bournemouth to promotion but has arrived in the Premier League with a point to prove after struggling at this level in his early career.

The 24-year-old is up and running for the campaign after an integral role in the Cherries’ comeback at Nottingham Forest this weekend. Solanke scored one – his 50th for the club – and provided another as Bournemouth came from two goals down to win 3-2 at the City Ground, with his goal straight out of the top drawer after an acrobatic finish from Lloyd Kelly’s cross.

Solanke had been frustrated with the physical treatment he received from Forest’s trio of centre-backs, but exacted his revenge after capitalising on Scott McKenna’s under-hit back pass to square for Jaidon Anthony to score the winner.

It’s four points from their last two since the change in management at Bournemouth and if the Cherries are to survive this season, Solanke will be central to their success.

Leeds backed Jesse Marsch in the summer transfer window, but a decision to overlook centre-back additions might come back to haunt the American.

Familiar flaws were exposed as Leeds capitulated at Brentford, with Diego Llorente enduring a nightmare performance against the Bees. The Spaniard was arguably culpable for three of Brentford’s five goals, including a horror moment as he was caught in possession as the last line of defence.

His attempt to beat the press with a defensive dribble backfired in spectacular fashion, as Yoanne Wissa stole possession and raced through to score. It was the lowlight of a performance littered with errors and poor communication at centre-back.

Emiliano Martinez admitted to ‘sleepless nights’ this week following Aston Villa’s dismal start to the season, but the goalkeeper might just be able to rest easier after a star showing against Manchester City.

Martinez came out on top for the most part in his duel with the Premier League’s leading scorer, with the battle between the Argentina international and Erling Haaland among the defining clashes of the 1-1 draw at Villa Park.

The 30-year-old was alert to rush out and prevent Haaland from rounding him, before making a pair of smart saves to thwart the Norwegian as City upped the pressure.

Haaland’s goal ensured their duel was not entirely one-sided, but it took a wondrous cross from Kevin De Bruyne to undo Martinez’s impressive goalkeeping performance.

Steve Cooper was quick to defend Scott McKenna following his glaring error in defeat to Bournemouth, as the Nottingham Forest centre-back gifted the visitors a late winner.

Forest were 2-0 up at the interval and cruising towards a win over their fellow promoted side, but collapsed in the second half as Bournemouth bounced back to claim three points.

The Cherries comeback was completed after a woeful mistake from McKenna, who gifted Dominic Solanke possession in a dangerous area with an under-hit back pass.

Solanke squared for Jaidon Anthony to tap home and the jury remains out on whether Forest’s centre-back options of McKenna, Joe Worrall and Steve Cook are cut out to compete at Premier League level.

Ivan Toney’s international credentials are strengthening with each performance this season, after the forward made it five goals and two assists in six Premier League games.

The 26-year-old scored a stunning hat-trick as Brentford thrashed Leeds 5-2 this weekend, with each finish underlining what he could bring to the national side.

Leeds couldn’t cope with the physical presence of Toney, who battled for every ball and provided the finishing touch to the chances that came his way. After stepping up to score from the spot for his 50th goal for Brentford, he showcased the improving repertoire of his finishing with a brilliant bending free-kick from the edge of the area.

A classy third completed his hat-trick in a statement performance from a footballer who has risen through the lower leagues to become major threat in the top division. Since the start of last season only Harry Kane (22) and Tammy Abraham (18) have scored more than Toney’s 17 league goals among English players in Europe’s top five leagues.

Leicester fell to a fifth straight defeat that confirmed their worst start to a league season since 1983, following a 5-2 loss at Brighton.

An entertaining first half saw the game poised at 2-2, before Leicester collapsed in the second period to end up on the end of an emphatic defeat. Once again the club’s defensive deficiencies were apparent, with Wilfred Ndidi struggling in a centre-back role.

The midfielder looked uncomfortable in the deeper position and heaped more pressure on manager Brendan Rodgers with a petulant kick to concede a penalty. After being beaten by Leandro Trossard, he hacked down the winger in the area to provide Brighton with the chance to establish a two-goal cushion from the spot.

Christian Eriksen was at the centre of Manchester United’s fourth win in succession, with the atmosphere ever-improving around Erik ten Hag’s side.

After a nightmare start, the Red Devils have responded with a winning streak and have taken the scalps of Liverpool and league leaders Arsenal in that sequence.

Against Arsenal it was Eriksen who proved decisive, with his ability to thread passes through defensive lines allowing United to punish the visitors on the break.

And he has his first Premier League assist for the Red Devils. 🅰️ pic.twitter.com/SwpyK7Y9aN

Operating in a deep role, his cutting passes into Bruno Fernandes led to the first and second goals for the home side, before he ran forward from deep to turn provider for Marcus Rashford to score the third.

Eriksen’s arrival was viewed as a signing of convenience given his availability on a free transfer, but he’s already cemented his place as a key figure in Ten Hag’s improving team.

Discussing refereeing decisions and the credentials of VAR is perhaps our least favourite of repeated subject matter, but it is impossible to assess the Premier League weekend without reference to the standard of officiating.

The introduction of VAR was supposed to usher in a new era of accurate decisions, though it has instead caused as much controversy and confusion as it has solved.

This weekend West Ham and Newcastle had goals disallowed after reviews, decisions which the referees’ body PGMOL has since accepted were wrong. Both teams thought they had scored and the goals had been confirmed by the on-pitch referee, only for VAR to controversially disallow each effort following reviews.

On each occasion those decisions changed the outcome of the result and critics have now argued that the technology is being used to re-referee games – often incorrectly – instead of its intended purpose to alter ‘clear and obvious errors’.

VAR is perhaps not the issue, but the officials running it at present certainly are. Whether the game is fairer due to its usage remains up for debate. Whether it has improved the spectacle of the sport and reduced controversy most certainly isn’t.