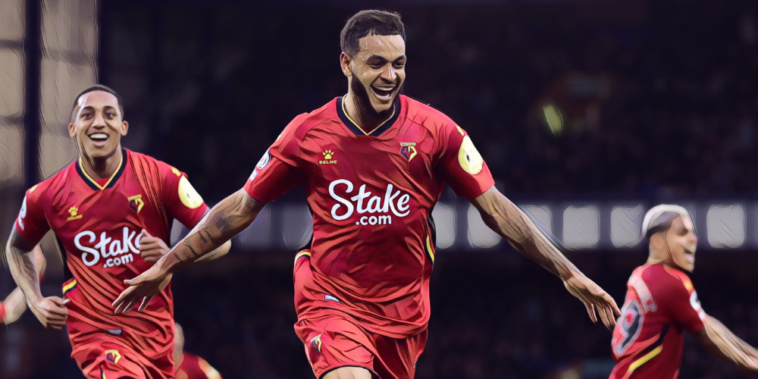 The headline result of the weekend was Manchester United’s home humiliation at the hands of arch-rivals Liverpool, as Mohamed Salah became the first opposing player to score a Premier League hat-trick at Old Trafford.

It was a weekend of hat-tricks as Chelsea’s Mason Mount and Watford’s Josh King also claimed match balls, the latter coming back to haunt his former side in an astonishing conclusion at Everton.

Elsewhere there were wins for Manchester City and Arsenal, whilst Leeds left it late to rescue a point against Wolves.

The Egyptian international continued his scintillating form this season with a clinical hat-trick this weekend, as Liverpool thrashed a sorry Manchester United 5-0 at Old Trafford.

Salah was electric as the Reds ran riot during the opening 45 minutes, assisting the opener for the impressive Naby Keita inside five minutes, before scoring Liverpool’s third, fourth and fifth goals to claim the match ball.

The 29-year-old’s goals were taken in clinical fashion with both Liverpool and Salah merciless, extending his club record of scoring in 10 consecutive games and taking his haul for the season to 15 goal involvements in nine appearances.

Salah also became the highest-scoring African player in Premier League history and more records will no doubt tumble if he maintains the unrivalled standards he has set so far this season.

Harry Maguire’s return to the Manchester United side proved to be a nightmare at Leicester last weekend, the centre-back arguably culpable for all four goals in a disappointing defeat to the Foxes.

Maguire’s fortunes went from bad to extraordinarily bad following the humbling home loss to Liverpool, with the centre-back again largely at fault in a calamitous defensive performance from the Red Devils.

Maguire vacated the space for Mohamed Salah to exploit in the build-up to the opener, whilst his mix-up with Luke Shaw led to Diogo Jota netting Liverpool’s second of the afternoon.

The 28-year-old hardly covered himself in glory for the remainder of Liverpool’s clinical performance, another sorry showing from Maguire who – alongside the struggling Luke Shaw – looks a shadow of the player who performed so well at Euro 2020.

Mason Mount’s hat-trick rightly claimed most of the headlines from Chelsea’s thumping 7-0 win against Norwich, but there were plenty of other reasons for Thomas Tuchel to be encouraged – not least the performance of Callum Hudson-Odoi.

Hudson-Odoi has struggled to win favour under Tuchel since the German’s arrival as head coach, whilst his limited opportunities have often come in an unfamiliar wing-back role.

Granted an opportunity as an inside forward in the absence of Romelu Lukaku and Timo Werner, the 20-year-old will hope his performance against Norwich can be the turning point in his Chelsea career.

Hudson-Odoi was in scintillating mood as the Canaries were overwhelmed at Stamford Bridge, scoring his first goal of the season after a defence-splitting pass from Mateo Kovacic.

The winger gave Ozan Kabak a torrid time throughout and it was his cross that led to Max Aarons’ own goal for Chelsea’s fifth, a performance that will raise hopes that Hudson-Odoi can begin to fulfil his potential.

Wolves were heading towards a hard-fought win at Leeds in stoppage-time at Elland Road, only to concede a penalty – and three points – in dramatic fashion.

Nelson Semedo had enjoyed a solid showing up until his late foul inside the box, having dealt with the threat posed by both Daniel James and Jack Harrison.

However, the Portugal international clumsily bundled over substitute Joe Gelhardt following a brilliant run from the teenage forward, providing Rodrigo with the chance to convert and snatch a dramatic late point for the home side.

Everton’s late capitulation at home to Watford was arguably the shock of the weekend, conceding four goals inside the final 12 minutes to the Hornets at Goodison Park.

On Halloween week it was a familiar face that haunted Rafael Benitez’s side, as Josh King scored his first Watford goals with a hat-trick on Merseyside.

The Norwegian failed to start a single league fixture during a six-month spell at Everton last season, but those amongst the home crowd must have been wondering how the Toffees – struggling for firepower with the lacklustre Salomon Rondon leading the line – allowed King to leave following a devastating display.

King – who admitted post-match he had a point to prove – netted Watford’s first equaliser from close range, before completing his hat-trick with two outstanding finishes late on, the second a rifled effort after selling Michael Keane a dummy inside the penalty area.

Norwich will not face teams of Chelsea’s calibre every week and few will have expected a result at Stamford Bridge, but the manner of the Canaries’ chastening defeat in west London will have made the already ringing alarm bells deafening.

Daniel Farke’s side are without a win in nine games and have scored just two goals so far this season, whilst their defence is now the worst in the Premier League after conceding seven at Chelsea.

It’s a recipe for an instant return to the Championship and on current form, it could be a relegation that is secured in unwanted record fashion.

The decision to sell the club’s best player and creative spark (Emiliano Buendia) in pre-season looks ever more costly even considering the handsome fee received from Aston Villa, whilst Farke’s odd overlooking of Billy Gilmour voids Norwich of a player with genuine quality amongst their ranks.

It would be little surprise to see Chelsea recall the on-loan Scotland midfielder in January from what looks like a rapidly sinking ship.

Ben Gibson’s ridiculous challenge whilst on a yellow card also deserves condemnation, a defender who wanted out after an afternoon of being given the runaround.

It appears that wherever Phil Foden plays, he is more than capable of being the best player on the pitch.

Already this season we’ve seen the 21-year-old flourish in a deeper midfield role with England, whilst he produced an exhilarating performance on the left wing during Manchester City’s draw at Liverpool earlier this month.

Recent weeks have seen Foden form the spearhead of the City side in a false nine position, a role which can also coax the best from his vast array of qualities.

Foden scored twice and provided an assist during City’s emphatic 4-1 win at Brighton, his speed and movement causing problems throughout as he roamed to cause confusion between the Seagulls’ defence and midfield.

Foden is excellent in tight spaces with his flawless close control and is beginning to become more and more efficient around goal, a welcome sign for City and worrying one for Premier League defences.

Harry Kane’s first league goal of the season at Newcastle last week raised hopes the forward was close to a return to his best, but this weekend’s showing at West Ham proved one of regression.

Kane struggled to make an impact in a performance that lacked drive and determination, producing a pedestrian display as Spurs were beaten at the London Stadium.

Kane’s ineffective performance paled into comparison to that of Michail Antonio for West Ham, the latter having evolved into a one-man wrecking ball when leading the line for the Hammers.

Antonio scored the only goal of the game after turning home Aaron Cresswell’s corner, evading the poor marking of the flat-footed Kane in a moment that symbolised their contrasting performances.

Two of the Premier League’s three lowest-scoring sides met at St Mary’s this weekend, though the result was surprisingly a thoroughly entertaining contest as the two teams shared four goals.

Both Southampton and Burnley have perhaps failed to get the results their performances have deserved this season as a result of wastefulness, but Sean Dyche will be happy with the attacking quality shown from summer signing Maxwel Cornet this weekend.

Cornet was a surprise signing from Lyon as the Clarets moved away from their familiar British-based recruitment strategy, but he has proven an inspired purchase so far and netted a brilliant brace at Southampton.

The 25-year-old headed home a first to open the scoring, before firing home a dipping effort from distance after Tino Livramento and Armando Broja had turned the game around for the Saints.

Burnley have often played it safe with signings given their lack of resources, but Cornet has shown so far that there’s value in broadening their horizons.